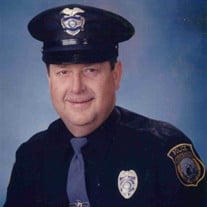 James D. Ordish, passed away on Thursday, August 19, 2021 at his home in Muskegon. He was born on Dec 12, 1941 to Herbert and Ida Mae (Hutson) Ordish in Muskegon, MI and was a lifelong resident. After graduating from Muskegon Heights High School (1961), Jim boarded the USS Randolph CV-15 (Aircraft Carrier) where he served two years active duty in the US Navy. Upon returning to Muskegon and exploring numerous career options, Jim again chose to serve. This time was for his community where he had an amazing 31-year career as a Police Officer for the City of Muskegon. During this time, he also joined the US Naval Reserves for an additional 19 years and retired as a “Master of Arms” Petty Officer First Class (E-6). After his retirement, Jim finished his working career with 11 years in the printing press room for the Muskegon Chronicle. Jim also enjoyed keeping himself active and busy doing some of the many things he loved. He was an avid deer hunter and loved a good day of perch fishing either from his boat or in his shanty. A unique hobby included searching for treasures with his metal detector along the shores of Lake Michigan. You would also find Jim and Judi, with many of their friends at one of the numerous social establishments they both belonged to. On Sept 7, 1968 Jim married Judi Dial and they had 53 wonderful years together. Judi survives him along with their children: Jil (Phil) Nehra, Jim (Rhonda) Yore, and William (Sarah) Ordish; ten grandchildren; eleven great-grandchildren; sister, Sandy (Terry) Hines; and brother, Robert (Diane) Dempsey. A CELEBRATION OF JIM’S LIFE with Military Rites and Police Honor Guard Ceremonies will be held 1:00 PM, Monday, September 13, 2021 at Vikings Linne’ Lodge #57 (3132 Lakeshore Drive, Muskegon 49441) with a luncheon to follow. Memorials may be directed to the Muskegon Police Department Honor Guard Memorial. Arrangements entrusted to The Walburn Chapel of Sytsema Funeral & Cremation Services, 1547 W. Sherman Blvd. Muskegon, MI 49441 (231) 759-8565.

James D. Ordish, passed away on Thursday, August 19, 2021 at his home in Muskegon. He was born on Dec 12, 1941 to Herbert and Ida Mae (Hutson) Ordish in Muskegon, MI and was a lifelong resident. After graduating from Muskegon Heights High School... View Obituary & Service Information

The family of James D. Ordish created this Life Tributes page to make it easy to share your memories.

Send flowers to the Ordish family.