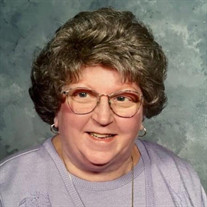 Janet E. Audo, age 85, passed away Sunday morning, October 3, 2021. She was born October 27, 1935 in Ottawa, IL to Samuel and Florence (Koenig) Baird. On November 29, 1953, she married Raymond B. Audo in Illinois and he preceded her in death on September 2, 2003. Janet worked in inventory control for J.C. Penny’s in California, Reed’s in Connecticut, and for Hardy Herpolsheimer’s in Muskegon. She was a member of Trinity Lutheran Church and was a social coordinator for Widow’s Together for 15 years. Janet loved spending time with her family. SURVIVORS include 4 children: Richard (Cindy) Audo of Tucson, AZ, Robert (Gretchen) Audo of Bridgton, ME, Mark (Laurie) Audo of Norton Shores, and Cara (Jim) Knapp of Jenison, MI; 7 grandchildren: Nicholas (Suki), Vincent (Rebecca), Christopher (Angel), Heather, Jacob, Justin, and Amber; 2 great-grandchildren: Liam and Damian; and several nieces and nephews. She was also preceded in death by her parents. SERVICES for Janet will be held 11:00 AM Thursday, October 7, 2021 at Trinity Lutheran Church (3225 Roosevelt Rd., Muskegon, MI 49441) with Pastor Paul C. Appold officiating. VISITATION with the family will be one hour prior to the service. Burial will take place in Lakeshore Cemetery, Grand Haven, MI. MEMORIALS to Trinity Lutheran Church or the Harbor Hospice Foundation will be appreciated. Share memories with the family at their online Guest Book at www.sytsemafh.com Arrangements by The Lee Chapel of Sytsema Funeral and Cremation Services, 6291 S. Harvey St., Norton Shores, MI 49444 (231) 798-1100

The family of Janet Eileen Audo created this Life Tributes page to make it easy to share your memories.

Send flowers to the Audo family.