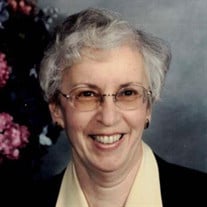 Janet Catherine (Arnold) Labiak passed away peacefully on Thursday, January 20, 2022 at her home in Muskegon. She was born on January 2, 1942 to Catherine (Goudy) and Lewis R. Arnold in Elkhart, IN. She was the fourth of eight children, including, Mary Story Arnold, L. Michael (deceased) (Janet Arnold, married to Dennis Nolan), Joseph E. (Pamela) Arnold, William M. (deceased) (Sandra) Arnold, Stephen John (Betty) Arnold, Elizabeth L. Mark, and Timothy M. (Lavinia Stronge) Arnold. She is survived by many loving and kind nephews, nieces, cousins, and one granddaughter, Izabel Ivy Labiak Barnes of Glenmont, NY. Janet was very bright and successful in school, graduating with honors from St. Joseph High School in South Bend, IN. She then received her bachelor’s degree in biology and education from St. Mary’s Notre Dame (1963), a BSN from the University of Michigan (1971), and her MSN (Master of Maternal Child Nursing) from the University of Colorado in 1972. Her work history included teaching elementary school in Danford, IL, Coordinator at Mott Children’s Health Center in Flint, MI, Public Health Nurse in Grand Traverse County, MI and Director of Nursing at Tuscola County Health Department, also in Michigan. Her first love was maternal child health and the WIC programs. After her retirement, she worked part-time for the Polk County Health Department in Florida where she was taught to speak “Southern.” Janet married Joseph Walter Labiak in Montrose, MI on April 7, 1973. They raised two sons, James Stephen (deceased 2021) and David Joseph (Kristin Hutcheison) Labiak of Mill Creek, IN. Janet and Joe lived in Flint, Traverse City and Caro, Michigan before retiring to Winter Haven, FL. They moved to Muskegon in 2006. Janet enjoyed supporting her sons' activities, skiing, golfing, and biking. In retirement she became skilled in playing the hammered dulcimer. She was a strong supporter of the nursing profession, children’s health programs, and women’s rights. In retirement volunteering became her passion. Her goal in life was to imitate her mother’s love for others, especially those in need. In Muskegon that included Mercy Hospital, Prince of Peace Catholic Church and most recently at First Evangelical Lutheran Church of Muskegon. Janet will be greatly missed for her sense of humor, her compassion, and her willingness to help anyone in need. A Memorial Service will be held at 12:00PM, Friday, January 28 at First Evangelical Lutheran Church. Visitation with the family will be one hour prior to the service from 11:00AM – 12:00PM. All are welcome to watch a Live Stream of Janet’s service on First Lutheran Church of Muskegon Facebook page. A Graveside Service will take place in the spring at St. Joseph Cemetery, Lansing, MI. In lieu of flowers memorial contributions in Janet’s memory may be directed to Sisters of the Holy Cross Ministry to the Poor (Notre Dame, IN 46556) or a charity of choice. Arrangements by The Sytsema Chapel of Sytsema Funeral & Cremation Services, 737 E. Apple Ave., Muskegon, MI 49442. Please feel free to share a memory with the family online at www.sytsemafh.com

Janet Catherine (Arnold) Labiak passed away peacefully on Thursday, January 20, 2022 at her home in Muskegon. She was born on January 2, 1942 to Catherine (Goudy) and Lewis R. Arnold in Elkhart, IN. She was the fourth of eight children, including,... View Obituary & Service Information

The family of Janet C. Labiak created this Life Tributes page to make it easy to share your memories.

Send flowers to the Labiak family.