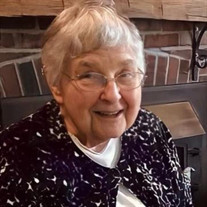 Janet Lee Trumble, age 88, passed away Wednesday, December 15, 2021. She was born February 27, 1933 in Marquette, MI to Dennie L. and Dorothy (Coburn) Clanahan. Her family moved to East Lansing in 1949, where she attended Michigan State University and earned bachelor’s and master’s degrees in Home Economics and Education. Following in her mother’s footsteps, she returned to the UP and taught home economics in Gladstone, MI. During this time, she made a solo trip to England. Jan then moved downstate again to teach home economics at St. Johns High School. There she met Dale Trumble, a first-year industrial arts teacher and fellow MSU graduate. Jan and Dale were married on the MSU campus on December 27, 1960. They settled in Muskegon, where Jan also taught, before they started a family. Jan and Dale raised 5 children in a home in Norton Shores, and in which they lived the rest of their lives. Dale preceded her in death on June 21, 2021. Fully devoted to her family, Jan created a home environment rich with opportunities for her children to explore and grow. Jan saw messes made by her children, whether in her kitchen or with school or craft projects, as opportunities for her children to learn and build confidence, independence, and creativity. She would drop whatever she was doing and accommodate any experimental project, school assignment, or last-minute promises for her famous cookies. Her nurturing and encouragement extended beyond her own home; for example, she positively influenced hundreds of boys and girls as a Scouting leader. Janet also had a lifelong devotion to church, and was an active member of Central United Methodist Church for 60 years. She taught Sunday school (mostly kindergarten) over a majority of those years, and until long after her own children were grown. She served as President of the United Methodist Women for many years, coordinated the food service for church events and was an early member of the bell choir. Jan had a calm, industrious demeanor, near infinite patience, and a subtle, wry sense of humor. Unconditionally friendly and accepting, she had a strong sense of fairness and empathy. In a word, she was kind. Survivors include 2 sisters, Diana Webster and Dorothy Hoopingarner, 5 children, Kevin (Denise) Trumble, David (Heather) Trumble, Kenneth (Heidi) Trumble, Scott (Vonnie) Trumble, Beth Cotner; 12 grandchildren and 3 great-grandchildren. She was preceded in death by her parents and 2 brothers, David and Stephen Clanahan. A Memorial Service will be held 11:00 AM Thursday, December 30, 2021 at Central United Methodist Church (1011 Second St.) with Pastor Rob Cook officiating. This service will be live-streamed through Central United Methodist Church Facebook page (https://www.facebook.com/muskegoncentralumc). Visitation will be held 4-7 PM Wednesday, December 29, 2021 at The Lee Chapel of Sytsema Funeral & Cremation Services, 6291 Harvey St, Norton Shores, MI 49444. Memorial Contributions may be directed to Central United Methodist Church. Sign the online guestbook at www.sytsemafh.com

The family of Janet Lee Trumble created this Life Tributes page to make it easy to share your memories.

Send flowers to the Trumble family.