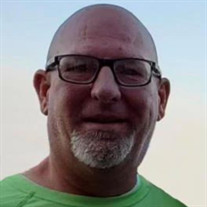 Jay Brian Fethke, age 53, passed away unexpectedly January 9, 2022, in Largo Florida. Jay was born July 6, 1968 in Muskegon, Michigan to Albert and Patricia (Cwynar) Fethke. He graduated from Muskegon Catholic Central in 1986 and attended Central Michigan University. Jay’s dry sense of humor and interest in spirited conversation served him well in many years of work at Cedar Point and Disneyworld. He continued in the hospitality industry at seasonal resorts and restaurants in the Northwestern states before returning to Florida. Jay was a loyal University of Michigan Wolverine fan and faithfully followed the maize and blue. He was an avid sports fan, enjoyed card playing, sports trivia, and casino trips. His favorite pastimes were fishing and golf. Jay was preceded in death by his grandparents, father, brother, Dale Fethke and uncle, Thomas Cwynar. He is survived by his mother, Patricia Fowler; stepmother, Denise Fethke; grandmother, Joan Panyrek; brother, Kevin (Jill) Fethke; nephews, Aaron and Adam Fethke; and niece, Samantha Fethke. According to his wishes, there will be no memorial service. A private interment service will be held in the spring. Memorials in memory of Jay may be directed to Muskegon Catholic Central at https://muskegoncatholic.org/support/giving/. Arrangements by The Lee Chapel of Sytsema Funeral & Cremation Services, 6291 Harvey St., Norton Shores, MI 49444.

The family of Jay Brian Fethke created this Life Tributes page to make it easy to share your memories.

Send flowers to the Fethke family.