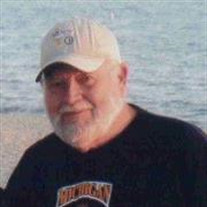 Jay Lee Huffman, husband of MaryLou Huffman, passed away peacefully into the arms of his Lord and Savior the morning of October 15, 2021 at the age of 86. He was born March 1, 1935 in Wabash, Indiana and was preceded in death by his father, Hugo Huffman, mother, Florence Huffman, brother, Gary Huffman and daughter, Maria (Huffman) Green. He leaves behind his sister, Marinette Mowrey, daughter, Christine Huffman, sons, Dan (Celia) Cook-Huffman and Anthony Huffman; grandsons: Jesse Cook-Huffman, Liam McGruder and Wyatt Huffman, granddaughters: Miranda (Corey) VanBuskirk, Hannah (Tommy) Torpy, Grace Cook-Huffman and four great-grandchildren: Tallon, Cooper, Oakley and Laken Torpy. In 1953, Jay became the first state-wide football all-star in Wabash High School history. He graduated that year after winning three letters each in football, basketball and track. He also earned First-Team All Central Indiana Conference honor in football and Second-Team All-CIC for basketball, plus went on to be selected to the First-Team All-State roster at tackle in football. From there he earned a spot on the inaugural North team in the first North-South Football All-Star game after his senior season. Jay then attended Wabash College in Crawfordsville, Indiana, where he was a member of the Beta Theta Pi Fraternity and as part of their football team, he won four varsity letters. While at Wabash College, he was scouted by the Chicago Bears, but that opportunity ended after he sustained a serious knee injury on the field. From 1964-1969, Jay served as an assistant football coach at Wabash High School. He earned a bachelor’s degree from Manchester College and his master’s degree from St. Francis College in Fort Wayne Indiana. Jay taught Middle School and coached football and basketball in Wabash, Indiana and from there he moved to Tipton, Indiana where he coached football and started the wrestling program there. After moving to Michigan, Jay taught, plus had many other “hats, at Hesperia Public Schools for 30 years. He completed additional graduate studies at Western and Central Universities in Michigan and retired from teaching in 1994. Jay also served as a Kids Hope mentor at Oakridge Elementary for over 20 years, served at Supper House in Muskegon for over 20 years, hosted American Red Cross Blood Drives at Wolf Lake UMC for over 10 years, volunteered for Wabash Day Project for Grand Rapids Veterans Home, was a sponsor at Wolf Lake UMC for the Boys Scout Troop #1006 for about 15 years, joined the Emmaus Community in 2004, served as a Trustee and Co-Chaired several Bible Studies at Wolf Lake UMC. Jay was an avid Chicago Cubs and Bears fan all his life. Indiana basketball was one of his favorite pastimes. Jay loved music, especially jazz, and he also liked to dance! He dealt in antiques and collectibles for over 40 years and dearly loved to sell at the flea markets and antique and collectible shows so he could interact with lots of people from all walks of life. This special man will be greatly missed by his friends and family. Visitation will be at Wolf Lake United Methodist Church from 12-1 p.m. on Saturday, November 6, 2021. A Celebration of Life service will follow at 1 p.m. In lieu of flowers, please consider memorial contributions be made to Wolf Lake UMC, Kids Hope or Temple UMC Supper House. Arrangements by, The Sytsema Chapel of Sytsema Funeral and Cremation Services, 737 Apple Ave., Muskegon, MI 49442.

Jay Lee Huffman, husband of MaryLou Huffman, passed away peacefully into the arms of his Lord and Savior the morning of October 15, 2021 at the age of 86. He was born March 1, 1935 in Wabash, Indiana and was preceded in death by his father,... View Obituary & Service Information

The family of Jay Lee Huffman created this Life Tributes page to make it easy to share your memories.

Send flowers to the Huffman family.