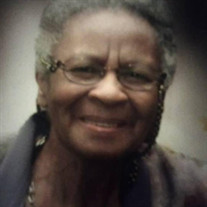 Jean Ann Robinson was born in Earle, AR on November 18, 1928 (1926) to the union of Clarence and Jean Palmer. Jean married Wess Robinson and to their union twelve (12) children were born. Wess and Jean moved their family to Muskegon in September of 1972. Jean accepted Christ at an early age in Earle, AR. She attended Church of Christ formerly located at 1333 Evanston Ave. Jean was a faithful Shepherd of the Lord, where she ministered individuals of all ages. She volunteered many hours in recruiting souls to the Lord by knocking on doors and inviting individuals to church via the Joy Bus. During her children's early years, she was a stay-at-home mom. She later worked at various restaurants as a cook (Mama Granada’s, Flamingo’s, Flamingo’s II, and Navarro’s) until her health failed. Jean was a loving wife who cared for her husband from 1978 until his death in 1994. She was a caring mother who not only raised her children but was also an inspiration to any and everyone she met. She was affectionately called mother by many in the community. She not only fed and clothed neighboring children but also many people sought her out for spiritual guidance. Jean leaves to cherish her memories: 5 sons: Carter D. Robinson of Albuquerque, NM; Gerry Robinson, Sr. of Muskegon, MI; Claude (Janet) Robinson, Sr. of Lansing, MI; Clarence W. (Carmelia) Robinson and Galvester J. Robinson, Sr. both of Muskegon, MI; 4 daughters: Charlotte (Kevin) Wright of Calumet City, IL; Cerjuana (Ray) Reasonover, Gwendolyn Paige, and Glenda (Cedric) Scott all of Muskegon, MI; 1 daughter-in-law: Tamela Robinson of Atlanta, GA; 30 grandchildren, 72 great grandchildren, and 3 great-great grandchildren: 2 special granddaughters who cared for her during her illness: Catrice Robinson and Colisha Robinson; 2 sisters: Rosie Lee Rogers of Fredericksburg, VA and Minnie Mae (Tyrone) Jefferson of Osceola, AR; a host of nephews, nieces, cousins, and special friends. Jean was preceded in death by her husband: Wess Robinson Jr; 2 sons: Danny Robinson and Gregory Robinson, Sr.; 1 daughter: Paula Dean and 1 son-n-law: Lee D Paige Sr. VISITATION with the family will be from 4-7 PM Thursday, October 28, 2021 at The Lee Chapel of Sytsema Funeral and Cremation Services, 6291 S. Harvey St., Norton Shores, MI 49444 (231) 798-1100. Per the family’s request, Face Masks will be REQUIRED. A private family graveside will be held in Sunrise Memorial Gardens. MEMORIALS to St. Jude Children’s Research Hospital will be appreciated. Share memories with the family at their online Guest Book at www.sytsemafh.com

Jean Ann Robinson was born in Earle, AR on November 18, 1928 (1926) to the union of Clarence and Jean Palmer. Jean married Wess Robinson and to their union twelve (12) children were born. Wess and Jean moved their family to Muskegon in September... View Obituary & Service Information

The family of Jean Ann Robinson created this Life Tributes page to make it easy to share your memories.

Send flowers to the Robinson family.