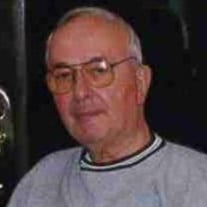 Mr. Jerald Eugene “Jerry” Schuppe, age 85, passed away Thursday, February 10, 2022 in Muskegon. He was born in Racine, Wisconsin on June 7, 1936 to Alex and Emma (Ruppel) Schuppe. Jerry was a veteran of the United States Army National Guard. He worked as a contractor for over 40 years and was the owner of Schuppe Construction prior to his retirement. Jerry was a member of the Northside Lions and he enjoyed meeting his friends at McDonald’s every morning for coffee. Most importantly, Jerry was a family man and enjoyed supporting his son and grandchildren in their many activities and interests. He married the former Karen Hafner in September of 1975 and she survives him along with one son, Tim (Kristen) Schuppe; two grandchildren, Madisen (fiance, Casey Gulledge) Schuppe and Brendan Schuppe; sisters, Shirley Wilson, Susan (Ken) Hunt, Lynda Gosse, Mary Weisharr; brothers-in-law, Ed Klotz and Tony Hafner; many nieces and nephews including special niece, Mary Beth Bruch and nephew, Austin Hafner. He was preceded in death by his parents; brothers, Jim and Richard Schuppe; sister, Carol Tagel; and sister-in-law, Mary Ann Klotz. A MEMORIAL SERVICE will be held 11:00 AM Wednesday, February 16, 2022 at Christ Church (1910 Ruddiman Dr. North Muskegon, MI 49445). VISITATION will be one hour prior to his service. MEMORIALS in memory of Jerry may be directed to the Harbor Hospice Foundation. Arrangements by The Lee Chapel of Sytsema Funeral & Cremation Services, 6291 Harvey St. Norton Shores, MI 49444. You may sign his online guestbook at www.sytsemafh.com

The family of Jerald Eugene Schuppe created this Life Tributes page to make it easy to share your memories.

Send flowers to the Schuppe family.