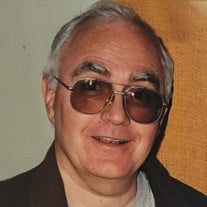 Mr. Jerry Lee Kinnucan, age 76, passed away Friday, August 13, 2021, at Spectrum Heart Center in Grand Rapids, Michigan. He was born in Muskegon, Michigan, on November 17, 1944 to John and Julia (Craker) Kinnucan. Jerry was a veteran of the United States Army and served in the Vietnam War. On September 9, 1992, Jerry married the former Lorraine Evonne Green Haruki in Colorado. He was employed by Teledyne Continental Motors for 26 years prior to his retirement in 1999. After retirement, he and Lorraine took a three-month trip out West pulling their fifth-wheel behind. He later took a stained glass class and thru the years gifted his artwork to many friends, charities and organizations such as the Detroit Zoo, and the Muskegon Rescue Mission. He even presented a piece to country singer Trace Adkins to be auctioned off for the Wounded Warriors Project. In addition, Jerry was a lover of fast cars, builder of his own home, fixer of anything, honorary president of the JayWire Solutions fan club, and so much more. His family will miss him terribly. Jerry is survived by his wife Lorraine, along with his daughter Kari Kinnucan (Al Short), sons Kevin Kinnucan and Randy Kinnucan, step-daughter Ann Haruki (Jay Blanchard); several grandchildren and great grandchildren; brother Jack (Nola) Kinnucan; sisters Janet Novak, Jillene (George) Race, and Jean (Dan) Wimmer; sister-in-law Shirley Kinnucan; special Aunt Gin; many cousins, nieces and nephews; and special friends the Schultz’s and the Stewart’s. He is predeceased by his parents, brother Julian Kinnucan, and brother-in-law Joe Novak. A CELEBRATION OF LIFE OPEN HOUSE will be held from 4-7 PM Saturday, August 28, 2021, at The Lee Chapel of Sytsema Funeral & Cremation Services, 6291 Harvey St., Norton Shores, MI 49444 with MILITARY HONORS being performed under the auspices of the Muskegon County Council at 5:00 PM. In lieu of flowers, MEMORIALS in honor of Jerry may be directed to the Gary Sinise Foundation. You may sign his online guestbook at www.sytsemafh.com

Mr. Jerry Lee Kinnucan, age 76, passed away Friday, August 13, 2021, at Spectrum Heart Center in Grand Rapids, Michigan. He was born in Muskegon, Michigan, on November 17, 1944 to John and Julia (Craker) Kinnucan. Jerry was a veteran of the... View Obituary & Service Information

The family of Jerry Lee Kinnucan created this Life Tributes page to make it easy to share your memories.

Send flowers to the Kinnucan family.