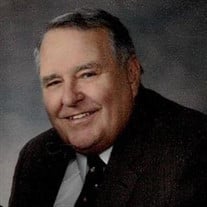 John Christian Schrier, age 88, passed away Monday, October 4, 2021 at Seminole Shores Assisted Living Center. He was born July 23, 1933 in Muskegon, MI to Chris and Ida (Trap) Schrier. He graduated from Muskegon High School in 1951 and earned his B.A. degree from Hope College in 1955. John was a veteran of the US Army and served 1955-57. On October 21, 1955, he married Ruth E. Wierenga in Grand Rapids, MI. John was the owner of Muskegon Insurance Agency for 55 years and retired in 2014. He was a charter member of the former Westwood Reformed Church where he served in many capacities including as an elder, sang in the choir, and taught Sunday School. John was currently a member of Unity Reformed Church. John was the past treasurer for the City Rescue Mission, and served on the boards of the Muskegon Children’s Home, Harbor Hospice and LOVE, Inc. John also served on the Hope College Board of Trustees for over 40 years. John sang with “His Men”, Cosmops, Barbershop Quartets, and various other choirs and quartets. Survivors include his wife, Ruth E. Schrier of Norton Shores; his son, John C. (Deborah) Schrier of Muskegon and their children, Kristina Schrier and Nicole (Greg) Froehle; his son, Mark E. Schrier of Muskegon and his children, Collin Schrier, Nicholas Schrier, and Mallory Schrier; his daughter, Lieschen (Sanford) Pastroff of St. Joseph, MI and their children, Jeremy (Brooke) Pastroff and Amanda Pastroff; and 1 sister, Mary Erickson of Albuquerque, NM. He was preceded in death by 1 sister, Jane Chapin. A Funeral Service will be held 11:00 AM Tuesday, October 12, 2021 at Unity Reformed Church (1521 Porter Road, Norton Shores). Visitation will be held 5-7 PM Monday at The Lee Chapel of Sytsema Funeral & Cremation Services, 6291 Harvey St, Norton Shores, MI 49444. Interment will take place at Restlawn Cemetery. Memorial Contributions may be directed to the Community Foundation for Muskegon County Scholarship Fund or the Harbor Hospice Foundation. Sign the online guestbook at www.sytsemafh.com

The family of John Christian Schrier created this Life Tributes page to make it easy to share your memories.

Send flowers to the Schrier family.