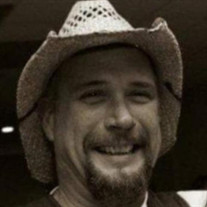 John Francis Thompson passed away March 28th, 2022, after a short but courageous battle with cancer. John was born January 7, 1966, to Francis and Joan (Yowell) Thompson, in Muskegon, Michigan. He graduated from Spring Lake High School and spent most of his life living in the surrounding area. After high school, John signed up to serve his country in the United States Army. As a true Thompson, he dabbled in many things. He spent most of his life working as a mechanic on both boats and cars, on fishing charters and also in construction. Singing while playing piano was a passion of his. He loved being outdoors. His daughters will hold many memories of adventures, including camping, 2-tracking, hunting, and fishing. He loved to laugh, grill and to spend time around a bonfire. He enjoyed Nascar, good Country music and a cold beer with family and friends. He was immensely proud of his Irish heritage. St. Patrick’s Day was taken seriously with good Irish beer, food, and some rumor of shenanigans involving an Irish flag. As proud as he was of his heritage, he was even more proud of his daughters and grandchildren. He loved being a grandpa. He took great pride taking them for rides on the tractor. He loved holding a great Father’s Day party, celebrating with his Son-in-Laws and other important men he knew. John was preceded in death by both of his parents. Surviving are his fiancé, Sara Olsen-Luther, of Spring Lake, and his beloved daughters: Desiree (David) Elliot of Fruitport, Nicole (Greg) Heighton of Norton Shores, Kayla (Robert) Anderson of Muskegon, and Allyssa (Jeffrey) Rubleski of Greenville. John is also survived by 12 grandchildren, whom he greatly adored: Savanna, Tayler, Chloe, Thomas, Makenna, Gabrielle, Sophie, Francesca, Lillian, Isaac, Kolbe, and Annabelle. Also surviving are sisters Sheila DeBaets of Denver, Colorado and Sharon Thompson of Colorado Springs, Colorado, brothers Steve (Vickie) Thompson of Muskegon and Mike (Kelcey) Thompson of Pleasant Prairie, Wisconsin. Per John’s wishes, cremation has taken place and there will be a private family service. In lieu of flowers, those who wish can make donations to: Muskegon Health Project.

John Francis Thompson passed away March 28th, 2022, after a short but courageous battle with cancer. John was born January 7, 1966, to Francis and Joan (Yowell) Thompson, in Muskegon, Michigan. He graduated from Spring Lake High School and... View Obituary & Service Information

The family of John Thompson created this Life Tributes page to make it easy to share your memories.

Send flowers to the Thompson family.