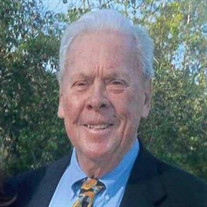 Jon Francis Chesney, age 80, passed away peacefully Saturday, August 21, 2021 surrounded by his family. He was born August 1, 1941 in Parry Sound, Ontario Canada to Kerold and Helen (Manley) Chesney. Jon married the love of his life, Susan Alexander, on January 9, 1966, and they shared 55 wonderful years together. Jon and Susan started their family in the Detroit area and enjoyed spending their summers boating on Upper Long Lake and winters skiing at Pine Knob. Jon and Susan later relocated to the shores of West Michigan and enjoyed entertaining and their sunsets on Mona Lake. Jon’s career began as an Industrial Engineer at IBM, then on to Federal Mogul, SPX, Northrup Gruman, and eventually retired from Compuware, taking GM through Y2K. He was known amongst his family and friends as a captain of industry. In his retirement he found great joy working as a park ranger, spending time outdoors, and especially being a part of his grandkids lives as they grew up. Jon’s grandchildren have been fondly referred to as their Seven Wonders of the World: Daric, Cooper, Wyatt, and Garrett Chesney and Madeline, Alex, and Elizabeth Eckerman. Making dollar bill paper airplanes, donut runs in the corvette, skull hunting under the eagle’s nest, knock-knock jokes, and playing Elf Bowling are just some of the fond memories his grandchildren have. Jon had a love of the fine arts and in celebration of his 50th birthday, he had the distinct privilege of conducting the West Shore Symphony Orchestra. Jon was hard working, quick witted and always put his family first. He will be remembered as a connoisseur of cigars and good scotch. Jon also enjoyed watching the stock market and his beloved Wolverines play football every chance he could. Jon’s greatest joy was spending time with his family; especially spring breaks in Perdido Key, Florida. Jon is survived by his loving wife, Susan Chesney; their children: Charlie (Lauren) Chesney and Leigh (Jamie) Eckerman; seven grandchildren; siblings: Michael (Susan) Chesney, Susan (Kevin) Carew, and Jim (Chrissy) Chesney; his 100 year old mother-in-law, Rose Alexander; in-laws: David (Pam) Alexander, George (Marcia) Alexander, and Milan (Debbie) Alexander; and numerous nieces, nephews, and extended family members. Jon was preceded in death by his parents; brother, Robert Chesney; and father-in-law, George Alexander. A Celebration of Jon’s Life will be held 11:00 AM Saturday, September 11, 2021 at The Lee Chapel of Sytsema Funeral and Cremation Services, 6291 S. Harvey St., Norton Shores, MI 49444 (231) 798-1100. Visitation with the family will be from 5-7 PM Friday, September 10, 2021 and also one hour prior to the service. Burial will take place in Norton Cemetery. In lieu of flowers, memorials in honor of Jon may be directed to the West Michigan Symphony or the Muskegon Museum of Art. Share memories with the family at their online Guest Book at www.sytsemafh.com

The family of Jon F. Chesney created this Life Tributes page to make it easy to share your memories.

Send flowers to the Chesney family.