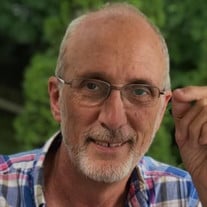 Jonathon Patrick Twa, age 67 of Spring Lake passed away quietly Tuesday, December 21, 2021, at the University of Michigan hospital in Ann Arbor due to Covid complications. He was born October 8, 1954, to Robert and Marjorie (Vink) Twa. On April 5, 1975, he married Roberta “Bobbie” (Young) Twa. Patrick was a member of Covenant Life Church in Grand Haven and graduated from Spring Lake High School in 1972 and took additional college courses, certificate programs and attended the Citizens Academy through the Ottawa County Sheriff Department. He enjoyed being with his family of 10 brothers and three sisters, meeting family and friends for Friday lunch at area restaurants (Pine Street Cafe and JW’s), home remodeling, and creating with wood, especially custom cutting boards, children’s rocking chairs and treasure boxes for his granddaughters. He started out working in the foundry business for 18 years and then started his home remodeling business, JP’s Carpentry Service, which eventually evolved to Accessible Remodeling-Aging-in-Place Remodeling. In 2015 he was hired as Construction Manager for Tri-Cities Habitat for Humanity until his retirement on August 13, 2021. Patrick was an Eagle Scout with the Boy Scouts of America and was the Building Superintendent for Covenant Life Church for several years. From 2015 to 2019 he served the City of Ferrysburg as a councilman as well as a member of the Building, Planning and Police Commissions, West Michigan Metropolitan Transportation Planning Program Policy Commission and Northwest Ottawa Rec Authority (NORA) and was also a Kid’s Hope mentor. Patrick had a strong faith and was a good and faithful servant to his God and church. He loved music of various genres, working with his hands, being outside, the Upper Peninsula, finding a great deal at a sale or the Restore and camping with friends and family. Working with volunteers through Habitat brought him joy when he’d instruct eventual homeowners or newbies the difference between right and left-hand nails, about board stretchers and teaching them how to use the tools. He had a great sense of humor, always had a smile and was the best hugger. His quick wit was countered with genuine care. He could shoot the s#!+ or have a deep conversation, ideally over a glass of bourbon. He loved learning and sharing those lessons. He was a good listener, had strong, calloused, but gentle hands. His recent retirement had brought out an enthusiasm we had not seen before, and we were all excited to share it with him. Prior to getting sick, he had dutifully prepared a ranch house for him and Bobbie to grow old together in. He is survived by his wife of 47 years, Roberta “Bobbie”; two sons, Adam (Rachel) Twa of Grand Haven and Benjamin (Katy) Twa of Norton Shores; four granddaughters: McKenna, Molly, Genevieve (Evie) and Cora; sisters: Kristin (Jim) Wagar, Theresa Twa (fiancé Paul Winsemius), Mary (Dan) Borchers; brothers: Doug (Carol) Twa, Mark (Marilyn) Twa, Jeff (Mary) Twa, Paul (Jackie) Twa, Matthew (Rhonda) Twa, Robert Jr. (Tina) Twa, Jim Twa, Tom (Monica) Twa and David (Bri) Twa; mother-in-law, Dorothy (Young) VerBerkmoes; sisters-in-law, Karen Leatherman, Kathy (Ron) Lawson, and Lisa Young; and many cherished nieces and nephews. He was preceded in death by his brother, Tim Twa and his parents, Robert and Marjorie Twa; father-in-law, Robert Young; step father-in-law, Al VerBerkmoes; and brother-in-law, Jack Leatherman. A celebration of Patrick’s Life will be held 2:00 PM Saturday, February 5, 2022 at Covenant Life Church. In lieu of flowers, a program will be established to support those interested in preserving wood craftsmanship in the building trades/teach wood craftsmanship. Details not yet available. Please sign the family’s online guestbook at www.sytsemafh.com. The family is being served by The Spring Lake Chapel of Sytsema Funeral & Cremation Services.

Jonathon Patrick Twa, age 67 of Spring Lake passed away quietly Tuesday, December 21, 2021, at the University of Michigan hospital in Ann Arbor due to Covid complications. He was born October 8, 1954, to Robert and Marjorie (Vink) Twa. On April... View Obituary & Service Information

The family of Jonathon Patrick Twa created this Life Tributes page to make it easy to share your memories.