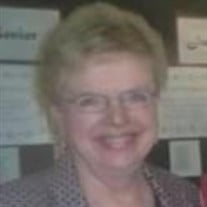 Mrs. Judith “Judy” Braid, age 85, of Muskegon formerly of Milford passed away January 27, 2022. She was born May 16, 1936, in Pontiac, Michigan to Allen and Carol (Redman) Palmer. On August 30, 1959, she married Rev. James Braid and he preceded her in death on May 21, 2012. Judy graduated from the University of Michigan with a degree in education while also performing in the UofM band. She was a very proud Alumni cheering for the maize and blue especially when it came time to play that team down south. She was very active in the community playing piano for the school musicals at both Sanford High School and Milford High School. She was always active in the church choir, involved in the United Methodist Women’s Group, and enjoyed playing piano organ duets at church. She loved music and musicals having seen many of the major Broadway shows. Even near the end she was playing piano for the residents and workers at Sanctuary at the Oaks. She is survived by two children: Lynne (Steve) Morgan of Linden, and Mike (Tera) Braid of Twin Lake, MI; two granddaughters, Paige (Jacob) Pattenaude, and Brittany (Jason) VandeVelde; three great-grandsons: Braxton, Briggs, and Malachi. She is also survived by several nieces, nephews, and friends. She was preceded in death by her sisters, Carolyn (Hal) Flynn, and Marilyn (Irv) Wilbur. Visitation will be held 1:00-3:00 PM Sunday, January 30, 2022, at The Lee Chapel of Sytsema Funeral & Cremation Services, 6291 S. Harvey St, Norton Shores, MI 49444. Visitation will also be held 12:00 – 1:00 PM, Monday, January 31, 2022, at Lynch & Sons Funeral Directors, 404 E. Liberty St, Milford, MI 48381 followed by a memorial service at 1:00 PM at the funeral home. Interment will be held at Milford Memorial Cemetery. Memorial contributions in memory of Judy may be given to Sanctuary at the Oaks, or Harbor Hospice Foundation. Please sign the family’s online guestbook at www.sytsemafh.com.

The family of Judith "Judy" Braid created this Life Tributes page to make it easy to share your memories.

Send flowers to the Braid family.