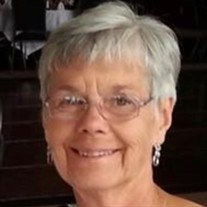 Mrs. Judith A. “Judy” Durnell, 81, passed away unexpectedly Wednesday, March 16, 2022, in Muskegon, surrounded by her loving family. She was born February 24, 1941, to Albert and Elizabeth (Jandris) Genter in Muskegon and was a lifelong resident of the area. Judy’s love and concern for her family, friends, and neighbors were immeasurable, but most of all for her husband of 62 years. Judy enjoyed the outdoors, her road trips “Up North” and camping at Ludington State Park where she and her husband hosted many years. She also enjoyed family gatherings, working in her yard, and having her yearly yard sales which were always a “Hit” in the neighborhood. On August 6, 1960, Judy married Lanny L. Durnell and he survives her along with three children: Keith Durnell, Kevin (Kim) Durnell, Beth (Dennis) Beehler; five grandchildren: Keith Durnell II, Erik (Megan) Durnell, Kyle (Blanca) Durnell, Breann (Josh) Emery, Brendan Buckner; five great-grandchildren and one on the way. She was preceded in death by her parents and two grandchildren, Michael Durnell, and Blake Buckner. The funeral service will be Tuesday, March 22, at 1:00 PM at The Lee Chapel of Sytsema Funeral and Cremation Services, 6291 S. Harvey St., Norton Shores, MI 49444. Visitation will be one hour before the service. Burial will take place at Norton Cemetery.

The family of Mrs. Judith "Judy" Durnell created this Life Tributes page to make it easy to share your memories.

Send flowers to the Durnell family.