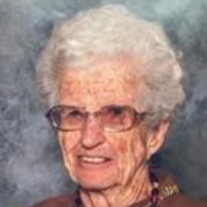 Mrs. Julia M. South, 101, went to be with her Lord and Savior on November 14, 2021. She was born March 15, 1920 to Harrison and Beulah (Ross) Espy in Flat Rock, IL and moved to the Muskegon area in 1951. Julia was a loving wife, mother, grandmother, and great grandmother to her family. She was a prayer warrior, Sunday school teacher, hard worker, enjoyed word searches, crafting, and being with her family. She loved cooking and could be counted on during peanut brittle season at her church. She was also known for her firm hand shakes, and back-breaking hugs. On March 15, 1939 She married Samuel South, and he preceded her in death June 1998. Survivors include one son, Richard (Fran) South, three grandchildren, Robin (Larry) Erdman, Rick (Chris) South, Roger (Lisa) South, six great grandchildren, Andrew, Kati, Hannah, Jessica, Ashley, and Joshua, one brother, Paul (Patricia) Espy. She was also preceded in death by an infant daughter, Janice M. South, daughter-in-law, Irene South, five brothers, John, Raymond, Royal, Kenneth and Sherl Espy, two sisters, Mille and Maxine. The funeral service will be Wednesday, November 24, at 11:00 AM at The Lee Chapel of Sytsema Funeral and Cremation Services, 6291 S. Harvey St., Norton Shores, MI 49444. Visitation will be one hour prior to the service. Burial will take place at Egelston Township Cemetery. Contribution in memory of Mrs. South may be made to Abundant Life Church of God, Wyoming, MI.

The family of Julia Marie South created this Life Tributes page to make it easy to share your memories.

Send flowers to the South family.