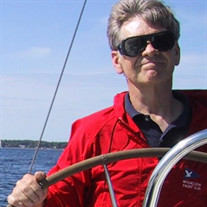 Kent James Krive, age 86, of North Muskegon, MI died peacefully in his sleep on October 2, 2021. He was born in Manistee, MI on August 19, 1935, to James and Fern (Loken) Krive. He graduated from Lakeview High School, Class of 1953. He was awarded the degree of Master of Music, Woodwind Specialist from Michigan State University. A devout Catholic, Kent was sustained by his faith and was most recently a member of St. Mary of the Immaculate Conception Catholic Church. He taught music performance in Michigan public schools for eighteen years, including six years at Muskegon High School, where the marching and concert bands he led took home first-place wins. He then taught for nineteen years at Ferris State University, first as director of bands, and then as an associate professor of humanities. A founding member of Blue Lake Fine Arts Camp, he served as principal clarinetist for the West Shore Symphony (now West Michigan Symphony) for 39 years. He was a regular saxophonist in the local dance band scene. He served as a dedicated adjudicator for the All-State Program of the Michigan School Band and Orchestra Association. Kent’s two loves were music and sailing. When not conducting or performing, Kent could be found on his sailboat, Shalom, and later, Kvikk, racing, cruising, or just enjoying an evening sail. Winner of too many Muskegon Yacht Club trophies to house, he was truly at ease when the sails were trimmed just right. When asked what he was most proud of in his life, he said: “My family.” Survivors include his beloved wife of nearly 64 years, Charlotte (Kinast) Krive; children, Kent Krive Jr., Christopher (Aimay) Krive, Julie (Robert) Stuberg, Anne Krive (Susan Ellis), Sarah Krive (Greg Grieve); grandchildren, Emma (Krive) Youngquist, Jonathan, David, Aaron, Katherine, Danny Krive, Carleton Stuberg, Julian Krive, Grey Grieve; five great-grandchildren; and half-brother, Richard Krive. In addition to his parents, he was preceded in death by his half-brother, James Krive, and stepmother, Barbara Grostick. A Funeral Mass will be held 11:00 AM Wednesday, October 6, 2021, at St. Mary of the Immaculate Conception Catholic Church, 239 W. Clay Ave., Muskegon, MI with Fr. Kyle Kilpatrick presiding. Visitation with the family will be one hour prior to the Mass (10-11AM). In lieu of flowers, donations can be made to Blue Lake Fine Arts Camp. Arrangements by, The Sytsema Chapel of Sytsema Funeral and Cremation Services, 737 Apple Ave., 231-726-5210.

Kent James Krive, age 86, of North Muskegon, MI died peacefully in his sleep on October 2, 2021. He was born in Manistee, MI on August 19, 1935, to James and Fern (Loken) Krive. He graduated from Lakeview High School, Class of 1953. He was awarded... View Obituary & Service Information

The family of Kent James Krive created this Life Tributes page to make it easy to share your memories.

Send flowers to the Krive family.