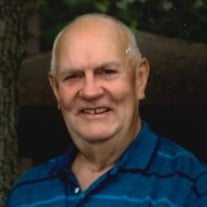 Mr. Larry D. Horton, age 85, of Robinson Twp. passed away Friday, January 21, 2022, surrounded peacefully by friends and family at home. He was born August 9, 1936, in Harbor Beach, MI to Clarence and Edlie (Cummings) Horton. On June 22, 1963, he married Ruth E. Bethke in Roseville, MI. Larry proudly served his country in the US Army with the 4th division/combat support group in Germany during the Berlin wall crisis, he also was honored to serve in the honor guard from 1958 to 1961. He was a building contractor in the Detroit area for many years. After living in Livonia for 35 years they retired and moved to the Grand Haven area in 1994. Larry was the happiest when he was outside, working around the farm, gardening, watching the animals in the backyard and spending time on the lake fishing. He also enjoyed cutting and splitting wood, making maple syrup, but most of all he loved his friends and family and getting together for a good fish fry. He will be missed by all. He is survived by his wife of 58 years, Ruth; sister-in-law, Charlene VanDoorne; many nieces, nephews, cousins, and friends. He was preceded in death by his nine brothers and sisters and their spouses, including his brother, Cpl. George Emerson Horton who gave his life in Guadalcanal during WWII. A funeral will be held 11:00 AM Wednesday, January 26, 2022, at The VanZantwick Chapel of Sytsema Funeral & Cremation Services, 620 Washington Ave, Grand Haven, MI 49417 with Rev. Daniel Anderson officiating from the Spring Lake Presbyterian Church. Visitation will be held 4-7 PM Tuesday, January 25, 2022, at the funeral home. Interment will take place in Lake Forest Cemetery. Memorial contributions in memory of Larry may be given to Harbor Humane Society or VFW Post of 2326 of Grand Haven. Please sign the family’s online guestbook at www.sytsemafh.com.

The family of Larry Horton created this Life Tributes page to make it easy to share your memories.

Send flowers to the Horton family.