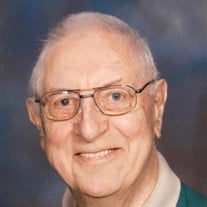 Lawrence E. Rust, age 99, passed away Monday morning, January 31, 2022, just a few days short of his 100th birthday. He was born February 6, 1922 in Muskegon to Lorin and Christine (Potts) Rust. Larry was a WWII U.S. Army Veteran and served his country in the South Pacific. He retired in 1981 from Shaw-Walker after 37 years. On May 8, 1947, he married Mary Hardy in Muskegon and she preceded him in death on December 29, 2005. He then married Alice Schmitz on January 23, 2018 in Muskegon. Larry had been the past Commander 5 times for the VFW Polar Bear Post 3734 and past Commander of the Muskegon County Council Honor Guard. He had also been chairman of the Veteran’s Park on the Causeway. He was a member of Ravenna United Methodist Church and enjoyed hunting, fishing, golfing, bowling, and playing card games with friends and family. SURVIVORS include his wife, Alice of Muskegon; 3 children: Sandra (Marvin) Frein of Muskegon, Susan (Tom) Bowen of Muskegon, and Edward (Gayle) Rust of Texas; daughter-in-law, Connie Rust of Florida; 9 grandchildren; 14 great-grandchildren; 3 great-great-grandchildren; and numerous nieces and nephews. He was also preceded in death by a son, Claude Rust in 2019 and 2 sisters: Marceal Stevens and Edonna Norris. SERVICES for Larry will be held 2:00 PM Saturday, February 5, 2022 at The Sytsema Chapel of Sytsema Funeral and Cremation Services, 737 Apple Ave., Muskegon, MI 49442 (231) 726-5210. VISITATION with the family will be from 5-8 PM Friday, February 4, 2022. Burial will take place in Sunrise Memorial Gardens. In lieu of flowers, donations to the Salvation Army or Ravenna United Methodist Church will be appreciated. Share memories with the family at their online Guest Book at www.sytsemafh.com

The family of Lawrence E. Rust created this Life Tributes page to make it easy to share your memories.

Send flowers to the Rust family.