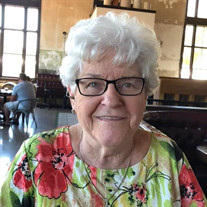 Lois Anne Hogan Meyers passed away peacefully at her home in North Muskegon, MI on January 4, 2022. She was born, Lois Anne Wilson, the youngest of six children, to Walter and Hanna (Craig) Wilson, in Waterloo, IA on March 3, 1933. Following graduation from St Mary’s Catholic High School, Lois worked at Capitol Tobacco Co. where she met her beloved husband, the late, James E. Hogan. The two were married in Waterloo on October 22, 1955. The couple, along with their first 3 children relocated to North Muskegon, MI. in 1961, moving into their family home on Mills Ave. where they were blessed with three more children. Lois loved her home and community living there until her very last day. In addition to managing a large, active family, Lois worked full-time starting at Yankee/Zody’s Department Stores and eventually building a distinguished career devoting her time to the State of Michigan working for MESC and the Department of Social Services where she worked with migrant farm workers and later with senior citizens. After her retirement in May of 1996, she and Jim were able to travel and enjoy a peaceful, quiet life. Lois and Jim spent many years sharing their time with loved ones in North Muskegon and Alamo, Texas. Always up for company, she hosted many get togethers and enjoyed visiting her countless friends and devoted family. Her husband Jim passed away in April of 2003, after 48 years of marriage. Lois continued to spend winters in Texas where she met and married Herbert Meyers, a fellow winter Texan from Iowa, April 22, 2006. Lois was an active member of the Prince of Peace Catholic Church in North Muskegon. She was a woman of faith, dedicated to serving the church and attending mass weekly. Lois served as a Eucharistic Minister delivering Communion to seniors and the homebound for 20 years up until the pandemic prevented her from providing that service. She loved and supported the West Michigan Symphony Orchestra where she attended events for nearly 60 years. One of her favorite pastimes was walking the break-wall at the Muskegon State Park, an activity that she continued to enjoyed every summer until her death. The matriarch of the Hogan family, Lois was a devoted wife, mother, grandmother and great- grandmother. Lois was preceded in death by her parents and 5 siblings, as well as her husband, James E. Hogan and beloved son James P. Hogan of Franklin, MA. Lois is survived by her second husband Herbert Meyers; children Pamela (Paul) Strockis of North Muskegon, Edward (June) Hogan of Colon, MI, Michael (Judi) Hogan of Valparaiso, IN, Robert (Mary Kay) Hogan of North Muskegon, Patrick Hogan of Spring Lake, MI and daughter-in-law Kristin Hogan of Franklin, MA; 14 grandchildren; 7 great-grandchildren; sisters-in-law, Carol Reyhons of Davenport, IA, Marcella Wilson and Marlene Hogan of Waterloo, IA in addition to many nieces and nephews. Lois will be greatly missed, but her memory and strong spirit will live on in her family and the many lives she touched. The Funeral Mass will be held at Prince of Peace Catholic Church in North Muskegon, MI on Thursday, January 13, 2022 at 11:00 a.m. Visitation will be held at 10:00 a.m., one hour prior to the service. A luncheon will follow at Prince of Peace Catholic Church. She will be laid to rest in a private family service beside James at St. Mary’s Cemetery, Muskegon, MI. In lieu of flowers the family requests that donations are made to the Muskegon Rescue Mission or the Greater Muskegon Food Pantry. Arrangements handled by The Sytsema Chapel of Sytsema Funeral & Cremation Services, 737 Apple Ave, Muskegon, MI 49442. Sign the online guestbook at www.sytsemafh.com

Lois Anne Hogan Meyers passed away peacefully at her home in North Muskegon, MI on January 4, 2022. She was born, Lois Anne Wilson, the youngest of six children, to Walter and Hanna (Craig) Wilson, in Waterloo, IA on March 3, 1933. Following... View Obituary & Service Information

Lois Anne Hogan Meyers passed away peacefully at her home in...