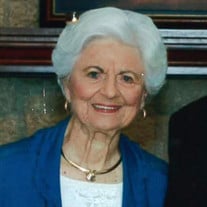 A Strong, elegant woman, age 95, went to be with her Lord and Savior December 4, 2021 from complications due to Alzheimer’s Disease. She was born on October 14, 1926, to Nicholas and Anne (Nauta) Cramer in Muskegon. Lois graduated from Muskegon High School in 1944 and then attended Hackley School of Nursing where she earned her R.N. in 1947. During her education at Hackley she received specialty training at Cook County Hospital of Illinois in communicable diseases, pediatrics, and psychiatric. In 1947 she became Dr. Shattuck Hartwell's private nurse attending him in his major and plastic surgery practice. In 1950 she married the love of her life, Harvey Van Andel, and began a family two years later. She retired from nursing in 1952 to devote her time to eventually raising two children, Thomas, who resides with his wife Katherine in California, and Mary Lumpp, who resides in Norton Shores. Lois never could spend time with anyone without sharing stories and volumes of pictures of her two children, seven grandchildren, and 13 great-grandchildren. Throughout her life she was very interested in growing in her knowledge and understanding of the Bible. She was voted President of the Church Guild, taught Coffee Break Bible Study, was very involved with Women's Bible Study Fellowship, and traveled globally throughout the years with Harvey visiting various missionaries to provide support and encouragement. She also spent many years volunteering her time to the County Health Department administering immunizations to the children, teachers, and staff in the Muskegon area school systems. In 1966, Lois and her husband purchased a cottage on the grounds of Maranatha Bible and Missionary Conference that brought years of spiritual growth, meeting many people in and out of ministry. After 42 years, they sold the cottage in 2008. She lived the majority of life in Muskegon but moved for a period of time to Grand Rapids to support her husband's career. In 1990 she and her husband also purchased a lot in the Palm Springs area of California in order to be near her son and his growing family. She again found a deepening of her knowledge and faith in Christ through the ORPS Chapel that she attended faithfully as well as meeting many wonderful speakers, musicians and people who were in and out of ministry. She continued alternating between Michigan and California until 2017 when she fell on the golf course in Michigan after a huge gust of wind knocked her down. She broke her pelvis in 3 places ending her golfing and traveling life. The stress from the fractures actually accelerated the development of her Alzheimer’s Disease that robbed her eventually of all her wonderful memories and abilities. The property was then sold in California. The final home where she lived with her loving husband until she went to Heaven was a condominium at Stillwater Springs in Fruitport Township that they had purchased in 1997. She joyously and faithfully attended Forest Park Covenant Church in Muskegon where she enjoyed hearing her husband sing in the choir. She was preceded in death by her parents, brother-in-law, Norman Lager, and son-in-law, John E. Lumpp. Lois is survived by her husband, Harvey, of 71 years of marriage, children, Thomas and Katherine Van Andel, and Mary Lumpp, and grandchildren, Andrea Buntley, Nathan Van Andel, John and Kristin Lumpp, Tommy and Megan Van Andel, Jeffrey and Tanja Lumpp, Laura and Will Vogel, and Matthew Van Andel, and great grandchildren, Alexis, Brendan, Lily, Mackenzie, Johnny, Tyler, Ryan, Brooklynn, Eleanor, Luna, Miles, Tilly, and Austin, and her dear sister, Mary Ann Lager. A memorial service will be held 2:00 PM on Saturday, January 8, 2022, at The Lee Chapel of Sytsema Funeral & Cremation Services, 6291 Harvey St., Norton Shores, MI 49442. Visitation will be one hour before the service. A private burial will follow the service. In lieu of flowers, memorial contributions may be made to Forest Park Covenant Church (forestparkcov.org), Maranatha Missionary and Bible Conference (vacationwithpurpose.orggive online), or the Van Andel Institute - Alzheimer Research (vai.org). You may sign her online guestbook at www.sytsemafh.com

A Strong, elegant woman, age 95, went to be with her Lord and Savior December 4, 2021 from complications due to Alzheimer&#8217;s Disease. She was born on October 14, 1926, to Nicholas and Anne (Nauta) Cramer in Muskegon. Lois graduated from... View Obituary & Service Information

The family of Lois Ruth Van Andel created this Life Tributes page to make it easy to share your memories.