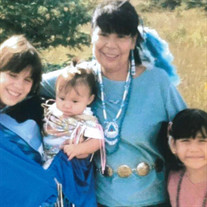 Margaret Elizabeth Rose, age 74, passed away on Monday, September 27, 2021, in Muskegon, MI. Margaret was born in Muskegon on January 7, 1947, to her parents, John and Elizabeth (Pego) Micko. After graduating from Muskegon Catholic Central High School Margaret worked a few different jobs, but most enjoyed her time as a homemaker. Margaret was an avid dancer and would attend pow wows all over the state. There were many people that were loved by Margaret, but she most cherished her five grandchildren. She will be lovingly remembered by her daughter, Donna Postema; her five grandchildren: Tiffany (Cody) Sowles, Thomas (Courtney) Aldrich, Brittany Aldrich, Alexis Postema, and Lindsay Postema; five great-grandchildren; and three sisters: Rita Schurino, Mary Hammond, and Veronica Burrows. She was preceded in death by her parents; her beloved son, James Rose; two brothers: Cecil Micko and Gerald Micko; and three sisters: Violet Peterson, Carol Duarte, and Phyllis Riley. A graveside service will be taking place on Tuesday, October 5th, at 2:00 PM at St. Mary's Cemetery in Muskegon (1915 Park St, Muskegon, MI 49441). In lieu of flowers, donations in Margaret’s honor can be made out to Hospice of Michigan. Arrangements entrusted to The Sytsema Chapel of Sytsema Funeral & Cremation Services, 737 E Apple Ave, Muskegon, MI 49442.

The family of Margaret Elizabeth Rose created this Life Tributes page to make it easy to share your memories.

Send flowers to the Rose family.