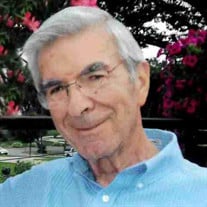 Marvin Paul Hoerle, age 85, went to be with his Lord and Savior on Monday, January 10, 2022, after a long and courageous battle with Parkinson’s. He was born on May 10, 1936, to Frank and Mary (DeVries) Hoerle in Muskegon. Marv worked for the Muskegon Chronicle for 34 years until his retirement in 1998. On August 27, 1954, he married the love of his life, Theresa Grayce Baade, and they spent 67 loving years together. Marv felt honored to serve the Lord in whatever way he was called, including speaking at Christian Businessmen Luncheons, preaching the sermon on Layman’s Day at his church, delivering the message at a friend’s church in Long Island, and speaking at times in smaller churches. He especially enjoyed leading congregational singing at Berean Church for 31 years, where he also served as President of the Board, Sunday School Superintendent, taught Sunday school, and was a true Prayer Warrior. During his time at Berean Church, he was an elder and a deacon, he belonged to small group, and Pastor’s Prayer Partners, as well as at his new church home of Forest Park Covenant Church. In his spare time the two things that brought him the most joy was spending time with his family and playing golf. Marvin is survived by his loving wife, Theresa Hoerle; children, Debra Tarney, Joan (Glen) Visscher, Susan (David) Visscher, Michael (Jeannine) Hoerle, Elizabeth (Ryan) Truax; grandchildren, Heather Fishman, Adam Visscher, Derek Hoerle, Tyler Hoerle, Jennifer Newton, Katie Hoerle, Ben Hoerle, Claire Hoerle, Connor Truax, Caleb Truax, Kelcie Truax, Cameron Truax, Cassian Truax; and siblings, Tom (Ann) Woodin, Barb (Jim) Turner, Judy (Harvey) Wagenmaker. He was preceded in death by his son, Dr. David Hoerle; sisters, Carolyn Dean, Nancy Castalonis; and brother, Jim Hoerle. A FUNERAL SERVICE for Marvin will take place on Friday, January 14, 2022, at Forest Park Covenant Church (3815 Henry St.) at 12:00 PM with visitation taking place one hour prior to the service. Burial will take place in Norton Cemetery. Arrangements entrusted to The Lee Chapel of The Sytsema Funeral & Cremation Services, 6291 S. Harvey St. Norton Shores, MI 49444. Donations in Marv’s name can be made out to either the Michigan Parkinson’s Association or Forest Park Covenant Church. Feel free to sign the family’s online guestbook and share a memory at www.sytsemafh.com.

Marvin Paul Hoerle, age 85, went to be with his Lord and Savior on Monday, January 10, 2022, after a long and courageous battle with Parkinson&#8217;s. He was born on May 10, 1936, to Frank and Mary (DeVries) Hoerle in Muskegon. Marv worked... View Obituary & Service Information

The family of Marvin Paul Hoerle created this Life Tributes page to make it easy to share your memories.

Marvin Paul Hoerle, age 85, went to be with his Lord and Savior...

Send flowers to the Hoerle family.