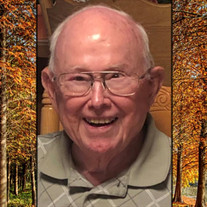 Melvin Leonard Maynard, age 91, passed away on Sunday, February 20, 2022. He was born on July 29, 1930, in Huber, MI in a house with no indoor plumbing, to his parents, Max and Pearl (Campbell) Maynard. When Melvin was young his family moved to Muskegon where he met his life-long friend, Don McCauley, and met his wife, the former Miss Patty Williams of Muskegon Heights. Melvin is a graduate of Muskegon High School, where he played clarinet and tuba in the BIG RED Band under the direction of William Stewart. While he was in high school, he also worked at a local grocery store. After graduating he attended Muskegon Community College, taking night classes while working full time and supporting his family. He worked for American Coil Spring Company for 43 years, retiring in 1992. Even after retiring he liked to keep busy, working at a few different places, such as SOS Engineering in Grand Haven, and then for Scherdel Sales & Technologies in Muskegon (who sent him to Mexico to help fix machine issues and train local personnel), and most recently working with Louie Kiel repairing pianos. In his free time, Mel sang in The First Baptist Church choir, taught Sunday school, repaired watches, played clarinet in the Port Cities Band, played the dulcimer instrument, restored old radio flyer wagons, and took his family out on the boat. Melvin will be lovingly remembered by his wife, Patricia; four children: Debra (David) Hilliard, Dianne Maynard, David (Amy) Maynard, and Daniel (Sandy) Maynard; seven grandchildren: David II (Jenna), Brittany (TJ), Marci (Matthew), Emily (Justin), Danni, Kelli, and Cami; six great-grandchildren with one on the way; and seven cousins: Joyce, Gaylord, Bud, Judy, Jerry, Larry, and Jimmy. Melvin was preceded in death by his parents and three sisters: Beverly Stiles, Alma Maynard, and Francis Maynard. A FUNERAL SERVICE will be taking place at 11:00 AM on Thursday, February 24 at First Baptist Church in Muskegon (1070 Quarterline Rd, Muskegon, MI 49442), with a VISITATION taking place an hour prior. In lieu of flowers, donations in memory of Melvin can be made out to First Baptist Church. Arrangements by The Lee Chapel of Sytsema Funeral & Cremation Services, 6291 Harvey St, Norton Shores, MI, 49444.

Melvin Leonard Maynard, age 91, passed away on Sunday, February 20, 2022. He was born on July 29, 1930, in Huber, MI in a house with no indoor plumbing, to his parents, Max and Pearl (Campbell) Maynard. When Melvin was young his family moved... View Obituary & Service Information

The family of Melvin L. Maynard created this Life Tributes page to make it easy to share your memories.

Send flowers to the Maynard family.