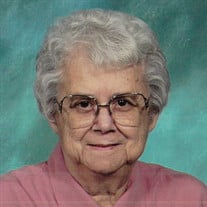 Melvina “Doreen” Hicks, age 85, passed away Sunday, September 12, 2021. She was born June 27, 1936 in Muskegon to Nels and Melvina “Gayle” (Badham) Carlson and had been a life resident of the area. On February 23, 1957, she married James Hicks in Muskegon and he preceded her in death on December 27, 2007. Doreen was an Executive Secretary for the Reeths-Puffer school system for over 19 years prior to her retirement in 1997. She was a member of Fruitland Covenant Church, where she volunteered as a Sunday School teacher, was head of the Covenant Women Ministries, and a Council member. Doreen had also been the past President, Vice President, secretary of Council, and leader for the Girl Scouts of America, spanning over 40 years. She also enjoyed traveling, reading, and needlework. Doreen is survived by 2 children: James E. Hicks of Twin Lake and Gayle L. (Mark) VanDyke of Muskegon; 6 grandchildren: Shelly (John) Carnes, Stephanie Singleton, Katie (Eric) Everett, Danielle (Austin) Whelpley, Christy Miller, and Nick (Maurita) VanDyke; 16 great-grandchildren; brother, Nels Verne (Barb) Carlson of Muskegon; sister, Arlene Scurlock of Belview, MI; and sisters-in-law: Betty and Martha Hicks. She was also preceded in death by her parents; grandson, Todd Singleton; sister, Wanda Cerchoiri; and brothers-in-law: Dennis Scurlock, Pete Hicks, and Robert Hicks. SERVICES for Doreen will be held 2:30 PM Saturday, September 18, 2021 at Fruitland Covenant Church (4283 N. Weber Rd., Whitehall, MI 49461) with Pastor Carl Franzon officiating. VISITATION with the family will be from 1:00 PM to 2:30 PM prior to the service at the church. Burial will take place in Fruitland Twp. Cemetery. MEMORIALS to the Harbor Hospice Foundation will be appreciated. Share memories with the family at their online Guest Book at www.sytsemafh.com Arrangements by The Sytsema Chapel of Sytsema Funeral and Cremation Services, 737 E. Apple Ave., Muskegon, MI 49442 (231) 726-5210

The family of Melvina "Doreen" Hicks created this Life Tributes page to make it easy to share your memories.

Send flowers to the Hicks family.