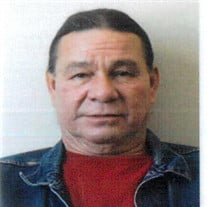 Michael Markowski Sr., age 70, passed away unexpectedly on Thursday, November 11, 2021. He was born to Ben Markowski Jr. and Cecilia Markowski (Cogswell) on July 14, 1951 in Muskegon, MI. He graduated from Orchard View High School class of 1969. He worked as a heavy equipment operator for many years at Nugent Sand and Wood Trucking before retiring in 2016. Michael took pride in being a Teamster and was honored to represent the underdogs. On July 17, 1970, he married the love of his life, Ann Ray in Muskegon, MI. Together they cherished many years filled with endless memories. Michael was a man of many hobbies, but he had a love for fishing and ice fishing in the Muskegon Lake. He had a passion for baseball and owned two teams for numerous years. He was a pitcher for the Muskegon Sex Pistols and also the Port City Shakers. He enjoyed pressing his luck at the casino and had a knack for billiards. Above all things, he truly loved spending time with his family and friends. He was a well-known face at Sam’s Drink All where he could strike up a conversation with just about anyone. He will always be remembered as being larger than life and a people person. His infamous thought of the party always being for him will truly be missed by so many. He is survived by his wife, Ann “Ray” Markowski; 2 children, Mikey Markowski Jr and Joni Anderson; 4 grandchildren, Jessie Markowski, Jayson Markowski, Stevi Anderson and Sam Anderson; 4 great-grandchildren; 2 sisters, Linda Morris and Judy Dodge; 3 brothers, Gary Markowski, Terry Markowski and David Markowski; and partners-in-crime, Dennis and Mouse; and close family friend, Puka. He is preceded in death by his father, Ben Markowski Jr.; mother, Cecilia Coyle; and partners-in-crime, Bill, Coco and Greg. According to his wishes, there will be no services. Memorial Contributions in Michael’s honor can be made directly to the American Diabetes Association. Arrangements entrusted to The Sytsema Chapel of Sytsema Funeral & Cremation Services, 737 E. Apple Ave., Muskegon, MI 49442. Share memories with the family at www.sytsemafh.com.

The family of Michael D. Markowski Sr. created this Life Tributes page to make it easy to share your memories.

Send flowers to the Markowski family.