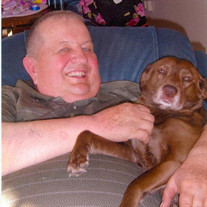 Mr. Michael Francis Pawlowski, age 80, passed away at his home on Friday, November 19, 2021. He was born in Muskegon on June 28, 1941 to Bernard and Irene (Kruszka) Pawlowski. Mike graduated from Aquinas College with a degree in Education. He taught math at Fruitport High School for over 10 years while starting his own business, Twin Lake Greenhouse. He built, owned and operated Twin Lake Greenhouses for over 45 years prior to his children taking over. He was a member of Prince of Peace – St. Mary’s of the Woods Catholic Church and had been involved in several projects at St. Mary’s of the Woods prior to their merger with Prince of Peace. Mike was involved with various greenhouse organizations. He grew up on a celery farm in Montague and had fond memories of the family tractor, an Allis Chalmers model G. Later in life, he enjoyed collecting, working on, and restoring these tractors. He was an industrious and frugal man who was known to be able to fix anything. On August 28, 1970, Mike married the former Anne L. Fodrocy in Spring Lake, and she survives him along with their three children, Jeff Pawlowski, Kristi Pawlowski, Dan (Stephany) Pawlowski; four grandchildren; two brothers, Tom (Judy) Pawlowski and Ted (Cindy) Pawlowski; four sisters, Joan (Ernie) Turmell, Theressa Mazurkiewicz, Nancy Vader, June Earhart; four sisters-in-law, Sister Mary Catherine O.P., Sandy (Ed) Jasman, Ann Fodrocy, Jan Fodrocy; and many nieces and nephews. He was preceded in death by his parents; siblings, Judy Rupar, Toni Pawlowski, David Pawlowski; and brothers-in-law, Tom Fodrocy, Steve Mazurkiewicz, and Jerry Earhart. The ROSARY will be prayed at 3:30 PM Friday, November 26, 2021 at The Lee Chapel of Sytsema Funeral & Cremation Services, 6291 Harvey St., Norton Shores, MI 49444. VISITATION will follow immediately from 4-6 PM Friday, November 26, 2021 at The Lee Chapel. MASS OF CHRISTIAN BURIAL will be celebrated at 11:00 AM Saturday, November 27, 2021 at Prince of Peace Catholic Church, 1110 Dykstra Rd, North Muskegon, MI 49445, with Fr. Godfrey Onyekwere presiding. Burial will be in Mt. Calvary Cemetery, Montague, Michigan. MEMORIALS in memory of Mike may be directed to the Cancer and Hematology Centers of West Michigan or the Harbor Hospice Foundation. You may sign his online guestbook at www.sytsemafh.com

Mr. Michael Francis Pawlowski, age 80, passed away at his home on Friday, November 19, 2021. He was born in Muskegon on June 28, 1941 to Bernard and Irene (Kruszka) Pawlowski. Mike graduated from Aquinas College with a degree in Education.... View Obituary & Service Information

The family of Michael Francis Pawlowski created this Life Tributes page to make it easy to share your memories.

Mr. Michael Francis Pawlowski, age 80, passed away at his home...

Send flowers to the Pawlowski family.