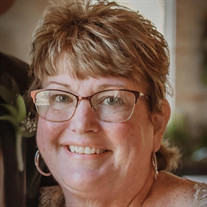 Michelle M. Morgenstern, 56, died Wednesday, August 18, 2021 at her Norton Shores home surrounded by her loving family, following a short illness. Michelle Marie Howe was born April 21, 1965 in Muskegon, the eldest child of Michael and Linda (Roe) Howe. “Missy” was a 1983 graduate of Spring Lake High School, where she was an all-state golfer for the Lakers. Thanks to a summer job at the Elks Golf Club, she met Roger Morgenstern, who loved golf almost as much as she did. The two went on their first date on Aug. 22, 1986, while attending Central Michigan University. When the date ended with Roger breaking his toe, Missy found out quickly she needed to take care of him, which she did for the next 35 years. Michelle and Roger both graduated from CMU in 1988, and the Chippewas have always had a special place in their lives with football tailgates and CM LIFE newspaper reunions, especially when their oldest son attended their alma mater. Michelle had a successful and rewarding 20-plus year career in real estate, serving in various leadership roles for the Muskegon County Association of Realtors, and then the merged West Michigan Lakeshore Association of Realtors, covering Muskegon and Ottawa counties. She also worked as a Realtor for CENTURY 21 Lumbertown and Nexes Lumbertown, retiring in 2016 to turn all her attention to her family, the center of her life. Michelle and Roger raised three amazing children, all proud graduates of Muskegon Catholic Central. After all graduating college, they have flourished in their chosen professions and are the pride and joy of their parents. When not running the household, Michelle gave back to her community in numerous ways, including volunteer work with St. Francis Elementary and Muskegon Catholic Central schools, the Muskegon Lakeshore Chamber of Commerce, St. Mary’s and St. Francis de Sales Catholic parishes, the West Michigan Lake Hawks, the Community Foundation for Muskegon County, Harbor Hospice, and anyone who needed help with a delicious meal, a listening ear and a good laugh. Michelle was preceded in death by her father Michael. Survivors include her mother Linda Howe of Muskegon, sister Colleen (Brad) Barraclough of Muskegon, brother Kevin (Laurie) Howe of Temecula, Calif., her husband of 32 years, Roger, of Norton Shores, children Patrick (Delaney) Morgenstern of Haslett, Emily Morgenstern of Muskegon, Nicholas Morgenstern of Detroit (girlfriend Betsy Stubbs), numerous cousins, nieces and nephews, her devoted dog Chloe and three grand dogs: Howie, Theo, and Junebug. The Mass of Christian Burial will be celebrated 11:00 AM Monday, August 23, 2021 at St. Francis de Sales Catholic Church (2929 McCracken St., Norton Shores) with the Rev. Charles Hall presiding. Visitation will be 4-7 PM Sunday at The Lee Chapel of Sytsema Funeral & Cremation Services, 6291 Harvey St, Norton Shores, MI 49444, and one hour preceding the Funeral Mass on Monday at the church. Interment will follow in St. Mary’s Cemetery in Muskegon. In lieu of flowers, memorial contributions are requested to the Harbor Hospice Foundation, The Greater Muskegon Catholic Schools Foundation and St. Francis de Sales Completing the Vision Campaign. The family would like to thank the staff of Mercy Hospital, Henry Ford Hospital, the Sanctuary at McAuley and Harbor Hospice for their outstanding care and compassionate support during Michelle’s illness. Sign the online guestbook at www.sytsemafh.com

The family of Michelle M. "Missy" Morgenstern created this Life Tributes page to make it easy to share your memories.

Send flowers to the Morgenstern family.