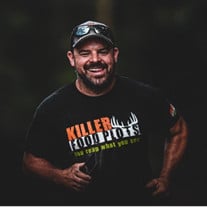 Nicholas Jay Percy, age 50, passed away on Sunday, October 10, 2021, at Mercy Hospital. He was born on September 24, 1971, to Joseph and Cyndi (Vento) Percy in Muskegon and graduated from Grandville High School in 1989. Nick left his mark on this earth in many places and with many people. He had a passion for food plots, habitat management, and whitetail hunting. This led him to owning and operating Killer Food Plots, a land and soil management business, which is well known across the country to avid hunters. Nick was one of a kind and he could outwork anyone. He also owned and operated a lawn, garden and small engine business in Muskegon known to the community as Agard’s City Boy Farmer. Family was Nick’s number one priority. His daughter Olivia was the love of his life from the day she was born. He loved fully and you knew you were loved deeply. He also loved his KFP family, friends, and customers, who knew him to be like “the energizer bunny on steroids”, for his Nick sized bear hugs, and his love for unsweetened iced tea that he carried around with him by the gallon! Nick met his Tracie Lynn in 2017 and they were planning to get married this fall. He is survived by his daughter Olivia Grace Percy, parents Cyndi (Bill) Hershey and Joseph Percy, sister Jennifer (Dan) Sillman, beloved grandfather Jasper Percy, fiancée Tracie Lynn, seven soon-to-be stepchildren, and many aunts, uncles, and cousins. A Celebration of Nick's Life will be announced at a later time.

Nicholas Jay Percy, age 50, passed away on Sunday, October 10, 2021, at Mercy Hospital. He was born on September 24, 1971, to Joseph and Cyndi (Vento) Percy in Muskegon and graduated from Grandville High School in 1989. Nick left his mark... View Obituary & Service Information

The family of Nicholas Jay Percy created this Life Tributes page to make it easy to share your memories.

Send flowers to the Percy family.