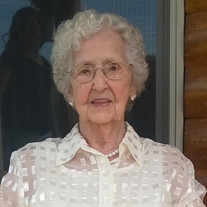 Norene Marjorie Flickema, age 98, went to be with her Lord and Savior on Monday, February 28, 2022. She was born on December 4, 1923, to Noel Bert and Irene Veronica (McMahon) Clawson in Muskegon. She is preceded in death by her husband (Albert Harry Flickema) and siblings. She spent her entire life in Lakeside, which she lovingly referred to as Squirrel City. In the last fourteen months, she moved from her beloved home to be cared for by her daughter in Fruitport township. Her early years found her at Bunker Junior High and she graduated from Muskegon High School. She was proud of the Bunker B and Muskegon M she earned for sports. Norene met her Obbie “in the neighborhood” and from the age of twelve he came to see her every night. In 1941 she married “Obbie”, Albert Harry Flickema, immediately after graduation. Shortly after their marriage, he was drafted to WWII. During the war, Norene worked at the Norge building guns for the war effort and later Anaconda. After the war, Norene and Obbie bought a brand new house across the street from her childhood home and started their family. Family was always important and welcome at Norene’s home. Often her five siblings and their spouses gathered at Norene’s home for coffee and cookies. She became an avid, loved fisherwoman and was featured in the Muskegon Chronicle. Her garden was full of beautiful perennials, which she lovingly maintained, and featured a gigantic rhododendron of which she was proud. She maintained friendships and correspondence with many of their friends from Albert’s Army unit and traveled to Army reunions which was a highlight of their retirement years. They also golfed, hiked all the trails at Hoffmaster, and fished until they were not able. Children, grandchildren and even great-great grandchildren frequented her home. She was special and loved by all. She often prayed for her family and counted on God to answer her prayers. She is survived by her two daughters, Marjorie (Clifford) Lund of Fruitport and Susan (Roger) Carlson of Muskegon; four grandchildren, Gina (Chris) Reynolds of Niles, Shelley Kurth of Spring Lake, (Brad Kurth of Muskegon), Chris (Becky) Lund of Norton Shores, and Kim (Aaron) Hennesey of Muskegon; twelve great-grandchildren, three great-great grandchildren; her sister-in law, Karolyn (Ken) Rollenhagen of North Muskegon, and many loved nieces and nephews. She was affiliated with Lakeside Baptist Church and Forest Park Covenant Church. A memorial service for Norene will take place on Monday, March 7, 2022, at 11:00 AM at The Lee Chapel, 6291 S. Harvey St. Norton Shores, MI 49444, with visitation taking place an hour prior to the service. For a more lasting memory, donations in Norene's name can be made to either the USS Silversides Submarine Museum or Center Lake Bible Camp. Feel free to sign the family’s online guestbook and share a memory at www.sytsemafh.com.

Norene Marjorie Flickema, age 98, went to be with her Lord and Savior on Monday, February 28, 2022. She was born on December 4, 1923, to Noel Bert and Irene Veronica (McMahon) Clawson in Muskegon. She is preceded in death by her husband (Albert... View Obituary & Service Information

The family of Norene M. Flickema created this Life Tributes page to make it easy to share your memories.

Norene Marjorie Flickema, age 98, went to be with her Lord and...

Send flowers to the Flickema family.