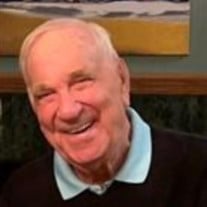 Mr. Norman L. “Norm” Rathbun, 86, passed away August 25, 2021, at his home. He was born November 3, 1934, to William E. and Ida C. (Erbes) Rathbun in Muskegon and was a lifelong resident. After a brief time in the Army, he came home and married his high school sweetheart, Judith L. Kelley on October 15,1960. He is survived by his wife Judith; three wonderful children: Tim (Candace) Rathbun, Deb DeVoursney (Jon Smalley), Craig (Tiffany) Rathbun; six beloved grandchildren: Bobby (Nan), Mike (Tarin), and Steffany DeVoursney, Katie, Paige, and John Rathbun; and two great-grandchildren due soon. He also sends his love to his extended family on both the Rathbun and Kelley sides: Bill Rathbun, Rich (Barb) Kelley, John (Sheri) Kelley, and sister-in-law Cheri Kelley; and to all his nieces and nephews. He was preceded in death by Barb Rathbun, Phil (Pat) Rathbun, Chuck (Bev) Kelley, and Dan Kelley. Special thanks and love to Patrick, his daily companion and friend. Norm loved sports, especially his Michigan State Spartans, where he was a 43-year football season ticket holder. He was a two-sport letter winner at Muskegon High School in football and basketball and was inducted into the Muskegon Sports Hall of Fame. He spent 20 years as a referee for both high school football and basketball in the Muskegon area. In accordance with his wishes, cremation has taken place and a graveside service will be held later. In lieu of flowers, contributions in memory of Mr. Rathbun may be made to the Kids’ Food Basket as he always had a soft spot for kids. Arrangements have been entrusted to The Lee Chapel of Sytsema Funeral and Cremation Services, 6291 S. Harvey St., Norton Shores, MI 49444.

The family of Mr. Norman "Norm" Rathbun created this Life Tributes page to make it easy to share your memories.

Send flowers to the Rathbun family.