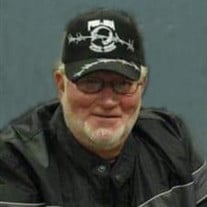 Mr. Paul G. Bethke, age 73, passed away Saturday, August 14, 2021 at home in Muskegon with his wife by his side. He was born in Ludington on October 12, 1947 to Alice (Grant) Payton and Patrick Bethke. Paul moved to Muskegon at the age of 5 years where he remained and made many friends throughout his life. He attended Muskegon Heights Schools and obtained his GED after returning from service in the U.S. Army. Paul was inducted November 3, 1966 and served the last 7 months in Vietnam running an earth mover. He was honorably discharged on October 24, 1968. Paul worked at Sealed Power (Dana) Mahle for 38 years, where he was an excellent machinist before moving to maintenance and retiring in October 2006. There he met his wife Janet L. Ozios and they were married on August 8, 1981, celebrating their 40th anniversary just recently. Paul was a lifetime member of the Muskegon Motorcycle Club and past President. He made an effort to meet and talk to new members and never asked someone to do something that he himself had not done. Paul was never afraid to get his hands dirty and he strongly believed that hard work was the key to success. Paul was always ready to lend a helping hand and share his knowledge of all things motorized. He spent the past 48 years riding motorcycles, and he and Jan put hundreds of thousands of miles on their various bikes traveling the country from Daytona to Sturgis and the Dragon’s Tail. His last ride was the 2006 Cheetah Chopper that he bought as a retirement toy. Recognized all over town, it is a custom built fire engine red trike with a 350 CI engine. Paul had many talents and enjoyed building and custom painting cars, motorcycles and hot rods. A longtime member of the Pulaski Lodge, and the Polish Falcons, Paul enjoyed socializing at many clubs including the VFW, American Legion, Polish Union, FO Eagles, Lithuanian Club and the Lakeside Veterans Club. Paul is survived by his wife, Jan; daughter, Lisa A. Bethke; grandson, Matthew P. Bethke; sister, Anita Knash; brother, Howard Payton, Jr., sisters-in-law, Carol Macaulay and Patricia Zaffuto; and many nieces, nephews, cousins and special friends. Paul was preceded in death by his mother, Alice (Grant) Payton and step-father, Howard Payton. No Memorial Services are desired and he requested to just “throw me to the wind”, and to honor him that is exactly what we will do! You may share memories with the family online at www.sytsemafh.com, or make donations in Paul’s name to your favorite charity. Arrangements by The Walburn Chapel of Sytsema Funeral & Cremation Services, 1547 W. Sherman Blvd. Muskegon, MI 49441 (231) 759-8565.

Mr. Paul G. Bethke, age 73, passed away Saturday, August 14, 2021 at home in Muskegon with his wife by his side. He was born in Ludington on October 12, 1947 to Alice (Grant) Payton and Patrick Bethke. Paul moved to Muskegon at the age of 5... View Obituary & Service Information

The family of Paul G. Bethke created this Life Tributes page to make it easy to share your memories.

Send flowers to the Bethke family.