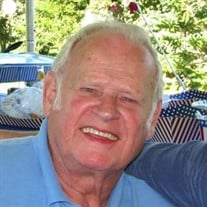 Paul David Herman, a life-long resident of Muskegon, passed away unexpectedly on January 18, 2022, at the age of 85. He was born in Muskegon on July 19, 1936, the eldest son of the late William and Martha Herman. Paul enlisted in the United States Air Force and served our country from 1957 to 1961 and was stationed at Osan Airforce Base, Korea following the Korean War. He worked for General Telephone Electric from 1965 until he retired in 1995. Paul was a devoted father, husband, and son. He had a twinkle in his eyes, a smile that lit up the room and an infectious laugh. Paul loved cars and drove his family to church in his 1930 Chevy and took them for rides in his 1968 Tornado. He was an avid and skilled mechanic, and welcomed the opportunity to help fix anyone’s car, blower, mower, and/or any small engine. Paul loved his Big Reds and attended many games and faithfully listened to them on his radio. He loved morning coffee with the “boys,” as he would call it. Paul was built like a tank and seemingly had nine lives. He once had a car jack fail and a car fall on him. His son Pat raised the jack and the neighbor rushed him to the hospital, but he was only bruised. He also fell from a telephone pole (after climbing up it in spikes) while repairing the phone line in front of his house and landed on his heels, leaving a deep impression in the ground but suffered no broken bones. When building his new garage, he slipped off the roof on a board and landed on the ground without any injuries. Paul is survived by his wife, Marcia Herman (Shriver); his children Paula (Rob) Tang of California, Patrick Herman of Muskegon, Pamela (Imran) Husainali of California, and Penny (Michael) Szymanski of Grand Haven; grandchildren David Herman of Muskegon, Stephanie (Andrew) Phinney of Fremont, Jerimiah (Victoria) Trute of Grand Rapids, Natalie and Catherine Tang of California, Sarah Trute of Ferrysburg, Hannah Husainali of California, Rebecca Herman and Benjamin of North Muskegon, Azhar Husainali of California. Great grandchildren; Michael Herman, Isaac Phinney, Hunter Herman, Eli Phinney, Leo Phinney all from Muskegon. His grand dogs meant the world to him too. The dogs would all gravitate towards grandpa when he entered the room; waiting patiently for their dog bones that were in his pockets. Grand dogs: Sophie, Flynn, Gus, Zoya and Poppy. A memorial service for Paul will be scheduled at a later time. Share memories with the family at their online Guest Book at www.sytsemafh.com Arrangements by The Sytsema Chapel of Sytsema Funeral and Cremation Services, 737 Apple Ave., Muskegon, MI 49442 (231) 726-5210

Paul David Herman, a life-long resident of Muskegon, passed away unexpectedly on January 18, 2022, at the age of 85. He was born in Muskegon on July 19, 1936, the eldest son of the late William and Martha Herman. Paul enlisted in the United... View Obituary & Service Information

The family of Paul D. Herman created this Life Tributes page to make it easy to share your memories.

Paul David Herman, a life-long resident of Muskegon, passed away...

Send flowers to the Herman family.