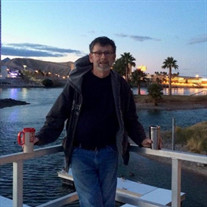 Paul R. LaForest, age 75, passed away Friday, September 10, 2021. He was born on March 24, 1946 to Paul and Mable (Jackson) LaForest in Ishpeming, MI. He was a proud member of Boilermaker Local 169 for 55 years including 10 years as the Boilermaker Business Agent for West Michigan. On January 5, 1988, he married the former, Celeste Engle in Las Vegas, NV. As husband and wife and best friends they cherished 33 years full of love, laughter and adventure. As a true Yooper, Paul was an avid fisherman and truly appreciated the outdoors. In recent years he also spent time camping and enjoying the waters of the Muskegon River and Hardy Dam Pond. Paul and Celeste loved to travel together. Over the years they took in many of the western National Parks and even made it to the east coast to experience the Atlantic Ocean cities including a special side trip to the Martin Guitar factory in Pennsylvania. They spent time hiking the mountains of Colorado with a special place in their hearts for the Rocky Mountain National Park. Bullhead City, AZ was their winter home for several years where he loved to cross the Colorado River to Laughlin, NV to play a few games and walk the Riverwalk. They visited Nashville, the home of country music, several times and enjoyed being surrounded by the music he loved. Paul’s appreciation of music led him to learn to play the guitar when he was a teenager. He spent the rest of his life perfecting that skill and learning to play the songs that spoke to him. Paul never met a stranger. His ability to connect with people and to enjoy life to the fullest led to many friendships over the years and many people grieving his passing. He was a man who believed you help others whether friend or stranger. He was always there for everyone he loved and was stickler for doing things the safe way causing his grandson, Tyler, to nickname him Mr. Safety. Above all things, Paul was a family man and will always be remembered as a loving husband, amazing father, and proud grandfather and great-grandfather. Paul’s fun-loving and optimistic spirit will be missed by all who knew him. The world will be a sadder place without his laugh and caring nature. He is survived by his loving wife, Celeste LaForest; 2 children, Ronald (Michelle) LaForest and Kim (Chris) Hawkins; 4 grandchildren, Justin LaForest, Nathan LaForest, Tyler (Courtney) Hawkins and Nicolas Hawkins; great-granddaughter, Adley Hawkins; 6 brothers, Roger (Susan) LaForest, Terry (Sue) LaForest, Doug (Linda) LaForest, Tim (Betty) LaForest, Gary (Lynne) LaForest and David LaForest; 2 sisters, Sharon Kling and Charmaine (Don) Ingersoll; and sister-in-law, Dora LaForest. He is preceded in death by his parents; 2 sisters, Joanne Wright and Carol Kotel; his brother, Larry; and brother-in-law, John Kling. Arrangements entrusted to The Sytsema Chapel of Sytsema Funeral & Cremation Services, 737 E. Apple Ave., Muskegon, MI 49442. Share memories with the family at www.sytsemafh.com.

Paul R. LaForest, age 75, passed away Friday, September 10, 2021. He was born on March 24, 1946 to Paul and Mable (Jackson) LaForest in Ishpeming, MI. He was a proud member of Boilermaker Local 169 for 55 years including 10 years as the Boilermaker... View Obituary & Service Information

The family of Paul R. LaForest created this Life Tributes page to make it easy to share your memories.

Send flowers to the LaForest family.