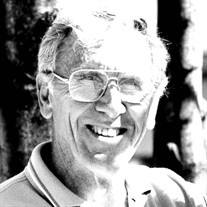 Paul Joseph Livers, age 87, passed away on Wednesday, December 1, 2021. He was born on August 3, 1934, to Francis and Mamie (Coomes) Livers in Owensboro, Kentucky. Paul was a very intelligent, hardworking, dry & quick-witted man, who loved people and never meet a stranger. He also was the inventor/creator of 3-player chess. Paul was a mathematician who received a couple of bachelor’s degrees before going on to work as a computer programmer for Naval Avionics in Indianapolis, where he met his wife, Charleen “Cricket” Jackson. He eventually retired from the U.S. Department of Defense after over forty years of service. Paul’s programming handywork was used in the Patriot and Tomahawk missile guidance systems. He loved reading, woodworking, and was also an avid bike rider who often travelled more than 50 miles in his hay-day with day trips from Indy to Chicago. One time he even rode all the way home to Indy from college at Saint John’s in Minnesota. PJ was always ready with a pun and was a big practical joker who, as the oldest of six siblings, led them into many adventures. They once used an airplane innertube to build a snow fort, where he was the ringleader in taking on the neighborhood kids in snowball fights…they won. A seasoned traveler that spent many summers road tripping and camping from California to Newfoundland, and northern Canada to Florida and back, often with “extra” kids other than just his own in tow. He took his youngest son and one of his friends to Space Camp at Cape Canaveral in Florida and then again a few years later another group of kids to Space Academy at the Space and Rocket Center in Alabama. Both times they stopped at Disney World because he said, “it’s too close not to”. Another fondly remembered trip was to a Jellystone campground in Nebraska on our way to Idaho, which had a pool shaped like Yogi Bear’s head. Road trips were always full of car games, singing and happy memories, even when we almost lost the camper to a windstorm in Nebraska. He loved the father and daughter dances, seeing The Lipizzaner Stallions, cub scouts, boy scouts, many plays and musicals and eventually even participated in set building with The Bellevue Children’s Theater and the Bellevue Village Players. He enjoyed backyard BBQs with family and friends, especially when they came from out of state to visit us in the “far northern tundra” in Michigan. He loved all the family pets, but it was Jack and Jill (Bantam chickens) and the 7 dwarves (their chicks) that held a special place in his heart from his childhood. Paul loved sports and taught, through youth coaching, what seemed like every major one, except football and track, and was proud to be President of the Ozark Little League in Indianapolis for several years. He was also especially pleased of the fact, that during his tenure, they were the first little league in the nation to allow girls to play baseball. Paul also started an indoor soccer league in a small community that had never had any kind of exposure to the sport and did so with aid of many friends and colleagues who joined in the effort. Paul will be lovingly remembered by his wife, Cricket; four children: Joe Livers, Kathleen Livers, Tom (Melinda) Livers, and Matt Livers; eight grandchildren: Joey (Colleen) Livers, Savannah, Josh Livers, Ashely Gates, Jenni (Ryan), Alex (Jeremy), Courtney, and Kayla; fifteen great-grandchildren; sixteen nieces & nephews and four siblings: Shirley (Bob) Reese, Bob Livers, Jerry (Dee) Livers, and Ron Livers. Paul was preceded in death by his parents and his sister, Carol (Richard) Barczuk. Arrangements entrusted to The Sytsema Chapel of Sytsema Funeral & Cremation Services, 737 E. Apple Ave, Muskegon, MI 49442

The family of Paul Joseph Livers created this Life Tributes page to make it easy to share your memories.

Send flowers to the Livers family.