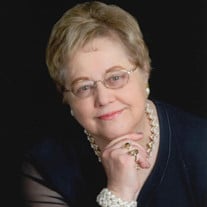 Mrs. Paula G. Hysell, age 80, of Grand Haven passed away Thursday, April 27, 2017 at home. She was born on January 9, 1937 in New York City to Salvatore and Gilda (Serra) Raguso. On November 7, 1954 she married John Hysell in Manhattan, New York and he preceded her in death in 1986. Paula was a member of St. Mary’s Catholic Church, where she was a lector, and Eucharistic Minister she was also a member of the St. Mary’s Women’s’ Circle. She enjoyed traveling, golfing, reading and spending time with her family. Paula was a member of the Knights of Columbus and the American Legion Auxiliary. In 1999 she retired from working for Ottawa County. She is survived by two sons, Daniel (Diane) Hysell of Grand Haven, and John (Shondell) Hysell of N. Augusta, South Carolina; seven grandchildren: Amber (Jacob) Belote, Jordan Hysell, Megan Hysell, Logan Hysell, Nicholas Hysell, Brad Hysell, and Ryan Hysell; five great-grandchildren: Russell, Everly, Isley, Grayson, and Rylynne; one sister, Barbara (John) Rogers. She was preceded in death by infant sister, Barbara Ann Raguso. A Mass of Christian Burial will be held 11:00 AM Tuesday, May 2, 2017 at St. Mary’s Catholic Church with Rev. Father David Gross officiating. Visitation will be held 1-3 and 5-7 PM Monday, May 1, 2017 at The VanZantwick Chapel – Grand Haven. Interment will take place in Lakeshore Cemetery. Memorial contributions in memory of Paula may be given to St. Mary’s Catholic Church or the American Heart Association. Please sign the family’s online guestbook at www.sytsemafh.com.

The family of Paula G. Hysell created this Life Tributes page to make it easy to share your memories.

Send flowers to the Hysell family.