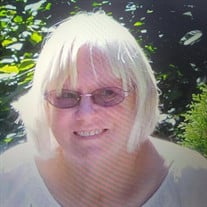 Peggy Jo Comrie, beloved wife, mother, grandmother and teacher aged 70, passed away Thursday, February 10, 2022. She was born January 9, 1952 at Gerber Memorial Hospital in Fremont MI. She referred to herself with immense pride as a “Gerber Baby”. She was born to Elmer R. and Patricia Lou (Baker) Sluiter. On June 15, 1974, she married Harvey Brian Comrie in Grant, MI. in the Grant Wesleyan Church. She graduated from Central Michigan University in 1974, with a degree in education, where the couple had met, they lived in adjoining dorms. She accompanied Harvey to Ann Arbor while he completed dental school. She worked the Big U as she called it, first in the purchasing department then at the dental school in the graduate endodontics (root canal) department as an assistant. Upon graduation Harvey joined the Navy and they spent two years at 29 Palms, California. It was a marine corps base out in the middle of nowhere. Fondly known in the corps as the “Stumps "or MCAGCTC. She worked at the dental clinic as an assistant, and she substitute taught at the local school system. She belonged to the Navy wives, and they put on USO style show to entertain the troops every year. This included a rifle drill as well as dancing of course :-) . Upon returning to Michigan, she and Harvey chose to locate in the Muskegon area. Peggy loved North Muskegon State Park and Lake Michigan. Harvey found a position with Dr Robert Morrow and Peggy worked there as well. She and Harvey decided to start a family, their son Geoffrey Brian Comrie was born on December 2, 1980, after they had worked all day. Peggy worked part time after Geoff was born. They had their second son April 9, 1985, Ross Harvey (Pamela) Comrie. Peggy then became involved with Jackie Sorensen aerobic dancing and was soon teaching classes. She enjoyed that immensely. She was interested in the Montessori method of teaching and became Montessori certified and when Ross started school at Michigan Dunes Montessori she started teaching there. Both sons were there for school. When Geoffrey finished 6th grade, she and the boys went to Mona Shores schools. She subbed her way into a full-time position 1997. Teaching was Peggy’s calling. She loved it. She taught from 4th grade down to pre-k, but mostly 4th, 3rd, and 2nd. Her greatest joy of all was family especially her grandchildren, Geoffrey, and Amy Bickett’s twins Harlyn Priscilla Comrie and Harvey Brian Comrie as well as Ross and Pamela’s daughter Miriam Mae Laurel Comrie. Peggy was a spectacular teacher, many of students call her their favorite. She loved teaching. She retired in 2012 after more than 20 years of teaching. Besides teaching and family she loved Michigan Football with season tickets from1982 to 2015 and traveling to Jamaica and other Caribbean islands. She would always bring school supplies and visit a school in Jamaica. She would then have name bracelets made for each of her students and would bring them back from Jamaica. She loved to play the song “Three Yellow Birds” in her classrooms. She called it her Spiritual place. She always said even the poorest Jamaican would give you the shirt off his back if he thought you needed it. Needless to say they traveled to her spiritual place many many times. She also learned to scuba dive as well as snow ski. She and Harvey also enjoyed boating and the boating lifestyle. They took many trips including several crossings of Lake Michigan and one trip as far as Mackinaw Island. She and Harvey were members of the Harbor Towne Yacht Club and then the Muskegon Yacht Club. They spent most of their summer weekends on the boat at Pigeon Key marina watching the boats come and go from Dockers restaurant, it was great entertainment. Survivors include her husband, Harvey; 2 sons, Geoffrey Comrie, Ross (Pamela) Comrie; 3 grandchildren, Harvey, Harlyn and Miriam Comrie; and 1 brother, Robert “Bob” Wolff. She was preceded in death by her parents and 2 brothers, Joe Renney and Donny Wolff. A Celebration of Life will take place 4:00 PM Saturday, March 5, 2022 at The Lee Chapel of Sytsema Funeral & Cremation Services, 6291 Harvey St, Norton Shores, MI 49444 with Pastor Tim Vander Haar officiating. Visitation will be held 2-4 PM prior to the service. Memorial Contributions may be directed to The Child Abuse Council of Muskegon County (www.childabusecouncil.org). Sign the online guestbook at www.sytsemafh.com

Peggy Jo Comrie, beloved wife, mother, grandmother and teacher aged 70, passed away Thursday, February 10, 2022. She was born January 9, 1952 at Gerber Memorial Hospital in Fremont MI. She referred to herself with immense pride as a &#8220;Gerber... View Obituary & Service Information

The family of Peggy Jo Comrie created this Life Tributes page to make it easy to share your memories.

Send flowers to the Comrie family.