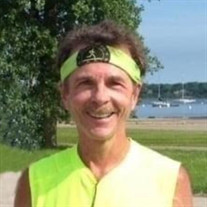 Philip J. Magnan, age 68, transitioned Home peacefully in his sleep, Saturday, January 22, 2022, surrounded by love, following the very aggressive return of cancer that was first addressed in 2006. He was born December 27, 1953 in Kalamazoo, MI to Robert and Barbara (Knowlton) Magnan. Phil has a degree in Industrial Engineering from Western University. He had worked since 2007 for Mar-Co Harbor Packaging, Inc. in Benton Harbor, MI and was semi-retired. On July 3, 2010, he married Cathy E. Saurman in Spring Lake, MI. He was a member of C3 Spiritual Community in Grand Haven. Phil was an avid trail runner. He could often be found running the dune trails at Coast Guard Park with his dog, Bailey. He also enjoyed hiking; one of his most cherished memories was backpacking in the Grand Canyon with his wife, Cathy. Phil had a passion for music and liked most genres, but especially enjoyed listening to classic rock. He loved to dance, no matter the occasion or who was watching, and could frequently be found at Hippie Fest dancing his heart out. He was a talented artist and muralist, writer, and published author. He was a kid at heart and was happiest when he was playing with children, especially his grandchildren. SURVIVORS include his wife, Cathy; 2 children: Kaitlin (Matthew) Magnan-Seager and Brenden Magnan; 2 grandchildren: Aidan and Cassian Seager; 2 step-children: Wendy (Luca) Serra and Matthew Saurman; 2 step-grandchildren: Lexi and Vincent Serra; brother, Robert Magnan; 3 sisters: Ann (Ron) Iseler, Susan Magnan, and Theresa (Tim) Paeltz; many nieces, nephews, and cousins; and his beloved dog, Bailey. He was preceded in death by his parents. Per Phil’s wishes, a celebration of his life will be held late spring at Coast Guard Park in Grand Haven. The date and time will be announced later. Memorials to Ottawa County Parks Foundation (P.O. Box 314, West Olive, MI 49460) or Wetland Watch (15129 Evergreen Ct., Spring Lake, MI 49456) will be appreciated. Share memories with the family at their online Guest Book at www.sytsemafh.com Arrangements by The Lee Chapel of Sytsema Funeral and Cremation Services, 6291 S. Harvey St., Norton Shores, MI 49444 (231) 798-1100

The family of Philip J. Magnan created this Life Tributes page to make it easy to share your memories.

Send flowers to the Magnan family.