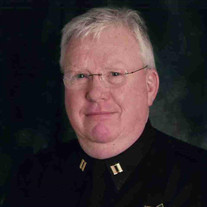 Philip A. “Phil” Marcil, age 75, passed away unexpectedly, but thankfully he was surrounded by family, on Saturday, April 16, 2022 at Mercy Health Muskegon. He was born on October 13, 1946 in Muskegon to Leonard and Arlaine (Haase) Marcil, and was a life resident of the area. Phil graduated from Muskegon High School, class of 1965, and after graduation, served his country with honor in the US Air Force during the Vietnam War, specifically in Phu Cat. He reached the Rank of Sergeant and proudly served as a K9 Sentry Dog Handler with the 37th Security Police Squadron Sentry Dog Section with his faithful K9s, Rex (stateside) and Teko. After his honorable discharge, he went on to work in law enforcement with Lakeview Police Department and then to Muskegon County Sheriff’s Office where he served as Captain for 37 years, prior to retiring in 2008. While at the Sheriff’s Office, he was instrumental in implementing initiatives to combat impaired driving including the “Dying for a Drink, You Might” campaign as well as instructing advanced Field Sobriety Training curriculum to law enforcement from around the state. Phil first brought the Victim Services Unit to the Muskegon County Sheriff’s Office and served as Training Co-Coordinator of the Victim Services Program for the Michigan Sheriffs’ Association until 2019. He also participated in the Vietnam Dog Handler Association, Vietnam Security Police Association, Fraternal Order of Police and Muskegon County Sheriff’s Office Mounted Unit. He was a proud member of VFW Post #3195 serving as Post Surgeon and along with his K9’s, is honored at multiple K9 Memorials around the country. Phil loved his Lord and Savior and was a longtime member of Calvin Christian Reformed Church and belonged to their Safe Church Committee. Phil had a wonderful sense of humor and loved to make others laugh. He was a huge supporter of the University of Michigan, Michigan Athletics and enjoyed all sports, especially Muskegon County area sports. Phil loved watching the deer, birds, wildlife and nature in his yard. He adored, protected and deeply loved his family beyond any measure and held close those dear friends who truly were his extended family. On June 15, 1974 he married the former Carol Luchies and together celebrated 47 years of devoted and loving marriage. Phil lived every day for his wife, and they are still connected by their heart. SURVIVORS include his adoring wife and soulmate, Carol; his adoring and proud daughter, Kimberly (David) Edlund; daughter-in-law, Kimberly (Pesta) Marcil; step-granddaughter, Kelly Edlund; granddaughters, Kylie Marcil, Emma Marcil, Sandra (Dwight Jr.) Shorter, and Ember Marcil; great-granddaughters, Serenity Reilley and Avery Shorter; sister, Ann Pothoff; sister-in-law, Mary Marcil; and estranged son, Robert Marcil. Phil was preceded in death by his son, David Marcil in 2006; beloved K9s, Rex, Teko and Elmo; parents, Leonard and Arlaine; brother, Lynn Marcil; and brother-in-law, Chuck Pothoff. Words cannot begin to express how much Phil is loved and how much he is missed, but we hold tight that will see him again in Christ. MEMORIAL SERVICES for Phil will be 11:00 AM Wednesday, May 4, 2022 at Calvin Christian Reformed Church (973 W. Norton Ave.) with Pastor Mark Milkamp officiating. VISITATION with the family will be 1 hour prior the service, from 10-11 AM at church. Memorial Contributions to Calvin Church Building Fund for the renovation of the Narthex and Sanctuary, Vietnam Dog Handlers Association, or the Michigan War Dog Memorial. Share memories with the family at www.sytsemafh.com. Arrangements by The Lee Chapel of Sytsema Funeral & Cremation Services, 6291 S. Harvey St. Norton Shores, MI 49444 (231) 798-1100.

The family of Philip "Phil" A. Marcil created this Life Tributes page to make it easy to share your memories.

Send flowers to the Marcil family.