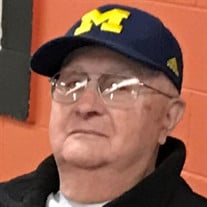 Mr. Ralph Burr, 84, passed away September 21, 2021, in Muskegon. He was born September 28, 1936, to Ralph and Emma (Jourden) Burr, Sr. in Muskegon and was a lifelong resident. He worked at Brunswick for 35 years, before retiring in 1996. Ralph was a former member of Immanuel Lutheran Church, and currently a member of Harbor of Grace Southern Campus. He was well known in Muskegon for his community involvement. Ralph was a founder and charter member of East Muskegon Little League, was a 53 year MHSAA registered official, a former off-ice hockey official, a founder of the Port City Boys Club, President of Port City Credit Union, a member of the Muskegon Sports Hall of Fame, and affiliated with No More Sidelines. He enjoyed all sports, was a U of M fanatic, loved the Tigers, traveling with Kathy to Alaska and Ireland, but most of all his grandchildren and great-grandchildren. On October 27, 1956 he married Kathleen M. “Kathy” Drushall, and she survives him along with seven children: Jeff (Kim) Burr, Jackie Burr, Julie Burr, Janet (David) Bates, Joe Burr, Judy Burr, Jill (Oscar) Hernandez; grandchildren: David (Michelle) Bates, Chris Bates, Jayme Bates Daniel Burr, Rachel Burr, Philipe Hernandez, Wade (Stacey) Vandenbosch, Johna (Jonathan) Hansen, Joe Burr II; great-grandchildren: Rian, Jayde, Josie, Damian, CJ, Jakob, Maya, Oliver and Malcolm; one sister Shirley Neumann; many nephews and nieces. He was preceded in death by his parents, 3 sisters, two grandsons: Matthew Burr and Oscar Hernandez, Jr., great-grandson, Emmitt Hansen. The funeral service for Ralph will be Saturday, September 25, at 2:30 PM at The Lee Chapel of Sytsema Funeral and Cremation Services, 6291 S. Harvey St., Norton Shores, MI 49444. Visitation will be Thursday and Friday from 5-8 PM, also at the funeral home. Contributions in memory of Mr. Burr may be made to the Big Red Athletic Foundation or No More Sidelines.

The family of Ralph Burr created this Life Tributes page to make it easy to share your memories.

Send flowers to the Burr family.