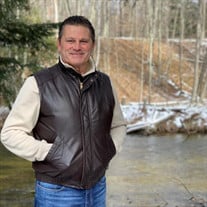 Rex G. Vanderlinde, age 59, passed away very suddenly on Thursday, August 26, 2021 at Mercy Hospital. He was born December 22, 1961 in Muskegon to William W. and Dolly J. (Fielstra) Vanderlinde and lived most of his life in the area. On August 11, 1989, he married Michele A. “Sheli” Kops in Muskegon. Rex earned his Bachelor of Business degree from Northern Michigan University. He began working at Executive Air Transport right out of high school. In 2000, he bought the company and continued as owner/operator until 2015 when he relaxed, but didn’t retire. Just three years ago, his dream came true and he bought a cabin up north – “The Pere Marquette River House” where he loved spending time with his family and friends. Rex was an enormous supporter of the Muskegon Community. He had a passion for aviation, which led to his love and involvement in Wings of Mercy. He will be greatly missed by his family and many friends. Survivors include his beloved wife of 32 years, Sheli Vanderlinde; his daughter, Jennifer (Ryan Susterich) Vanderlinde; his sister, Carol (Bijoy) Mahanti & family; 3 brothers, Scott Vanderlinde, Jeff (Sheryl) Vanderlinde, Bill (Lanette) Vanderlinde & family; his brother-in-law, Bill (Shelley) Kops; and his close and special nieces and nephews, Holly (Trevor) Mertens, Katie (Jared) Taylor, Evan Kops, and Ashley Kops. He is also survived by many beloved nieces and nephews. Rex was preceded in death by his parents, his in-laws, Muriel (Tom) Wiser and Bill Kops. A Memorial Service will be held 3:00 PM Wednesday, September 1, 2021 at The Lee Chapel of Sytsema Funeral & Cremation Services, 6291 Harvey St, Norton Shores, MI 49444. A Celebration of Life will follow 5-7 PM Wednesday at the Muskegon Country Club, 2801 Lakeshore Drive, Muskegon, MI 49441. Memorial Contributions may be made to Wings of Mercy or The American Heart Association. Sign the online guestbook at www.sytsemafh.com

Rex G. Vanderlinde, age 59, passed away very suddenly on Thursday, August 26, 2021 at Mercy Hospital. He was born December 22, 1961 in Muskegon to William W. and Dolly J. (Fielstra) Vanderlinde and lived most of his life in the area. On August... View Obituary & Service Information

The family of Rex G. Vanderlinde created this Life Tributes page to make it easy to share your memories.

Send flowers to the Vanderlinde family.