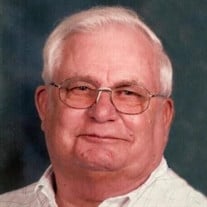 Richard W. “Dick” Grimm, age 86, passed away Saturday, December 4, 2021. He was born July 19, 1935 in Perham, Minnesota to Walter and Lillie (Simpson) Grimm. Dick had been in the grocery business his entire life and had owned and operated G & J Market in Wolf Lake for over 18 years prior to his retirement in 1998. He was a member of Our Redeemer Lutheran Church. On October 8, 1955, he married Joyce Kalavitz in Muskegon and she preceded him in death on January 14, 1999. He then married Jane L. Morton in Muskegon on June 25, 2005. Dick was an avid John Deere collector and also loved going for car rides, in hopes of spotting one of his favorite animals, the Hereford red cow. In his earlier years, he also enjoyed bowling. SURVIVORS include his wife, Jane Grimm; 4 children: Bryan (Ellen) Grimm, Jeff Grimm, Carl (Terri) Grimm, and Jason (Jene’) Grimm all of Muskegon; 9 grandchildren; 14 great-grandchildren; 1 step-daughter and 2 step-grandsons; brother, Rev. Dale (Linda) Grimm of Chelsea, MI; and sisters-in-law: Sandra Grimm of Grand Haven and Ruth Wernstrom of Muskegon. He was also preceded in death by his parents; daughter-in-law, Tammie Grimm; sister, Shirley Reelman; and brother, Raymond Grimm. A Celebration of Life Visitation will be held from 2-4 PM on Monday, December 13, 2021 at The Sytsema Chapel of Sytsema Funeral and Cremation Services, 737 Apple Ave., Muskegon, MI 49442 (231) 726-5210. A Private family service will be held later. Share memories with the family at their online Guest Book at www.sytsemafh.com

The family of Richard W. "Dick" Grimm created this Life Tributes page to make it easy to share your memories.

Send flowers to the Grimm family.