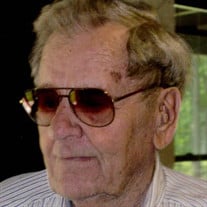 Richard “Dick” Hagen, 93, passed away at home surrounded by loving family on Saturday, September 11, 2021. He was born in Muskegon on February 11, 1928, to Martin and Virginia (Hale) Hagen and grew up in Fruitport Township. Upon graduating from Muskegon Heights High School, Dick proudly served his country, enlisting in the United States Army at age 18 in June of 1946. He was sent to Occupied Korea aboard the troop ship SS LaGrande Victory. Upon his return he used the GI Bill to assume an apprenticeship as a patternmaker, later joining his father-in-law at Holland Pattern Co. in Holland, Michigan where he became partner in 1969, and later sole owner. He started Holland Alloys in the 70’s and both businesses continue today with son Greg. On June 16, 1950, he married the love of his life, the former Carolyn Witt, with whom he spent 71 wonderful years. Together they were long-time members of Calvin Christian Reformed Church. Besides his passion for his businesses, which he continued to visit in his later years (even as recently as last month), he also loved working in his yard and garden. His true joy was spending quality time with family at his homes in Norton Shores and Mesa, Arizona. Dick was past president of the West Michigan Chapter of the American Foundry Society, current member of the American Legion Post 28 and was a long-time season ticket holder at The Big House. Go Blue! Dick is survived by his beloved wife, Carolyn Hagen, daughter R’na (Ron) Komarek, sons Gary Hagen and Greg Hagen, grandchildren Katherine (Nick) Hopkins, Lisa (fi. Ryan Lawrence) Hagen, Nicole Hagen, Hobie Hagen and Kara Komarek, great-grandchildren, Delaney and Callen Hopkins and his sisters, Barbara (Jerry) Lahnala and Jane Gates and many nieces, nephews and cousins. He was predeceased by his parents Martin & Virginia Hagen and siblings Walter Hagen and Lori Smith, along with his in-laws, Gerrit and Rica Witt. A funeral service for Dick will take place on Monday, September 20, 2021 at 11:00 led by Pastor Mark Milkamp at The Lee Chapel of The Sytsema Funeral Home, 6291 S. Harvey St., Norton Shores, MI 49444 with visitation taking place one hour prior to the service. In lieu of flowers, donations in Dick’s name can be made to the Muskegon Rescue Mission, Harbor Hospice Foundation or the charity of your choice. Feel free to sign the family’s online guestbook or share a memory at www.sytsemafh.com.

The family of Richard O. Hagen created this Life Tributes page to make it easy to share your memories.

Richard “Dick” Hagen, 93, passed away at home surrounded by loving...

Send flowers to the Hagen family.