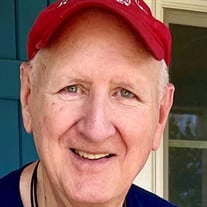 Mr. Richard Junior King, age 83, of New Era, passed away Saturday, December 11,2021. He was born March 14, 1938, in Grand Rapids to Richard Sr. and Bette (Crawford) King. Rich cherished time with his family, camping, traveling everywhere with his dog and was the proud owner of a 1988 red corvette. He was an accomplished self-taught musician of the guitar and piano. With great excitement, he would go watch his sons play in their bands and dance the night away. Rich learned to hunt from his dad and was a fantastic recurve bow hunter. You could find Rich in the woods hunting from October to January always trying to get the big buck! He enjoyed fly fishing, which he learned from his Uncle Roy, he would fish the Western Michigan rivers with his sons and his friends. He would especially talk fondly of fishing trips with John Moore of Shelby. He enjoyed playing hockey, followed many local teams and was an avid Red Wings fan. Rich served in the Army (Dental Corps) where he learned the dental technician trade, later owning his own laboratory serving many dentists in the area. Rich always enjoyed a great meal, and had many favorite restaurants but none topped the list more than the Stony Lake Inn. You could find him there often having a rib-eye steak and visiting with all the local patrons. Rich will be greatly missed by many. He is survived by his three children: Jeffery (Sandi) King, Jody (Steve) McNeil, and James (Julie Barager) King, children’s mother, Anita King; seven grandchildren; twelve great-grandchildren; brothers, Guy (Della) Gutos, Greg (Anne) Gutos, sister, Gayl (Jim Mika) Gutos. He was preceded in death by his parents, Richard King Sr., William and Bette Gutos; sister, Dolly Kessler. A private family gathering will take place. In lieu of flowers, memorial contributions in memory of Richard may be given to; Hospice of the E.U.P, 308 W. 12th Ave, Sault Ste. Marie, MI 49783 or Harbor Hospice, 1050 W. Western Avenue, Suite 400, Muskegon, MI 49441 Please sign the family’s online guestbook at www.sytsemafh.com.

The family of Richard Junior King created this Life Tributes page to make it easy to share your memories.

Send flowers to the King family.