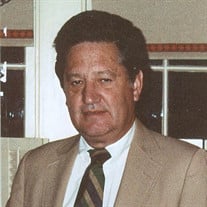 Richard Fauri Lynch, age 86, passed away in Grand Haven, MI, on Tuesday, November 16, 2021. Richard was born on July 18, 1935, to Richard and Angela (Fauri) Lynch in Bad Axe, MI. He graduated from Bad Axe High School in 1953, and from there he went on to receive his bachelor’s degree from Michigan State University, and after that his master’s from The University of Michigan. Richard moved to West Michigan in 1965 to take a job as Principal of Reeths Puffer High School. On July 25, 1992, he married the former Rosilind Black, and they spent many wonderful years together. Richard loved to watch Detroit Tigers baseball, and he was also a fan of Notre Dame football. Some of Richard’s pastimes include listening to music from the 50s and 60s and going on cruises to the Eastern Caribbean with his wife. More than all of that he loved the comfort of his home. He will be lovingly remembered by his wife, Rosilind Lynch; daughter, Judith Ann (Gene) Lynch; son, Michael Richard (Kimberly) Lynch; brother, Patrick Lynch; and nephew, Michael Lynch. He was preceded in death by his parents and his brother, Jack Lynch. No public funeral service will be taking place per Richard’s request, but donations in his memory can be made out to the Reeths Puffer High School Athletics Program. Arrangements entrusted to The Lee Chapel of Sytsema Funeral & Cremation Services, 6291 Harvey St, Norton Shores, MI 49444.

The family of Richard F. Lynch created this Life Tributes page to make it easy to share your memories.

Send flowers to the Lynch family.