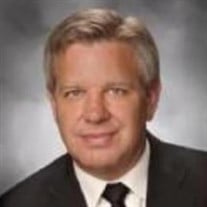 Richard Allen Scheerer, age 66, passed away on Thursday, December 2, 2021. He was born on January 11, 1955, to Fred and Beverly (Brown) Scheerer in Muskegon. After high school Rick went on to graduate from Ferris State University with a degree in marketing. On April 12, 1975, he married Marlene Hedland and they have 2 children together. He spent many happy years at the Two Hearted River in the upper Peninsula fishing with family. He enjoyed his trips and spending time with his children through the years. Rick worked in several sales positions, including Lakeshore Carpet, Klingman’s and his latest years at Coldwell Banker as a realtor. He happily retired in 2017. On January 2nd, 2010, he married Linda (Barnard) Scheerer. They shared several interests such as traveling, camping, hiking, weeks in Curtis and just being happy together. He attended and was very active at St. Gregory’s Episcopal Church. Rick was a kind and loving person willing to help anyone out. He will be missed by many. Rick is survived by his loving wife Linda Scheerer; son, Rob Scheerer from Chico, CA; daughter, Lindsay (Mark) Wilson of Sheffield, England; one grandson, Alec Wilson; four step children, Tiffany (Thom) Grimm, Terra (Eric) Doctor, Jason (Jennifer Bostrom) Westerhouse and Janna (Kyle) Osterhart; ten step grandchildren; two brothers, Bill (LuAnn) Scheerer and Jack Scheerer; along with several nieces and nephews. He was preceded in death by his parents; Fred and Beverly Scheerer; sister Barbara Scheerer; and brother-in-law, Fred Schultz. A MEMORIAL SERVICE for Richard will take place on Tuesday, December 7th, 2021, at 2:00 pm with a visitation one hour prior to the service at St. Gregory’s Episcopal Church, 1200 Seminole Road, Muskegon, MI with the Rev Lily Marx officiating. In lieu of flowers the family requests donations to St. Gregory’s Episcopal Church. Mask are encouraged at the service. Arrangements entrusted to The Lee Chapel of The Sytsema Funeral & Cremation Services, 6291 S. Harvey St. Norton Shores, MI 49444. Feel free to sign the family’s online guestbook and share a memory at www.sytsemafh.com.

Richard Allen Scheerer, age 66, passed away on Thursday, December 2, 2021. He was born on January 11, 1955, to Fred and Beverly (Brown) Scheerer in Muskegon. After high school Rick went on to graduate from Ferris State University with a degree... View Obituary & Service Information

The family of Richard "Rick" Allen Scheerer created this Life Tributes page to make it easy to share your memories.

Send flowers to the Scheerer family.