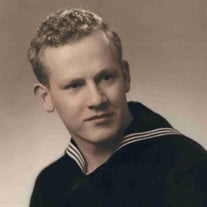 Robert George Anderson, age 94, went to his heavenly home on Friday, April 29, 2022. He was born on February 8, 1928, to Ernest and Elizabeth Anderson in Muskegon. He graduated from Muskegon High School in 1946 where he was an all-state Big Red football player. Bob proudly served his country in the United States Navy. He went on to graduate from Michigan State University in Mechanical Engineering. He worked for Allis-Chalmers, Kaydon and in 1961 he joined his brother at Hodgeon&Anderson Ironworks. On September 30, 1961, he married the love of his life, the former Rosalie Rommel, and they spent 60 happy years together. Bob was a faithful member, trustee and elder of St. John’s Lutheran Church. He enjoyed golfing, bowling and was an avid fisherman who took many fishing trips to Canada. He was a member of many local groups including the American Legion #28, The Vikings Linne Lodge 57, where he and Rosalie are reigning cribbage champs, and the Spring Lake Lions club for 40 years. Bob was a loving husband, father, grandfather, uncle and friend. He is survived by his wife, Rosalie Anderson; children, Mark (Paula) Anderson, Debra (James) Boismier, Karen Anderson, Robert (Amy) Anderson, Bradley (Wendy) Anderson, Kim (Samuel) Tanielian; grandchildren, James (Rachel), Lauren (Chris), Rosa, Cristina, Emily, Sara, Reed, Sam, Alexander, Matthew, Stephanie, Rachel, Owen; great grandchildren, Drake, Mara. He was preceded in death by his parents and brother William (Gayle). A special thank you to Dr. Mary Boyer and the staff at Harbor Hospice Poppen House. A MEMORIAL SERVICE for Bob will take place on Saturday, August 13, 2022 at 11:00 am at St. John’s Lutheran Church (527 Taylor Ave. Grand Haven, MI 49417) with visitation taking place an hour prior to the service at church. Burial will take place in Spring Lake Township Cemetery. Arrangements entrusted to The Lee Chapel of The Sytsema Funeral & Cremation Services, 6291 S. Harvey St. Norton Shores, MI 49444. For a more lasting memory donations in Bob’s name can be made to the St. John’s Lutheran Church, the Harbor Hospice Foundation, or the Vikings Linne Lodge. Feel free to sign the family’s online guestbook and share a memory at www.sytsemafh.com.

Robert George Anderson, age 94, went to his heavenly home on Friday, April 29, 2022. He was born on February 8, 1928, to Ernest and Elizabeth Anderson in Muskegon. He graduated from Muskegon High School in 1946 where he was an all-state Big... View Obituary & Service Information

The family of Robert George Anderson created this Life Tributes page to make it easy to share your memories.

Robert George Anderson, age 94, went to his heavenly home on...