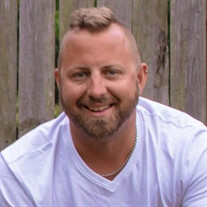 Mr. Robert Lee Bennett, age 34, died unexpectedly Wednesday, December 15, 2021 as the result of an ATV accident. Robert was born in Muskegon on April 8, 1987 to David and Becky (Read) Bennett and was a graduate of Reeths-Puffer High School, class of 2006. On July 17, 2010, Robert married the former Megan Scott. Robert lived bigger than life, and had a personality that made you love him. He valued friendships and made the effort to maintain those relationships. If you met Robert, you loved him, and his family affectionately called him “Cool Guy Rob”. Robert lived big and loved big things, including his 38-foot Fountain boat, off-road Jeep, and five-ton Army truck that he would take around to parades. He enjoyed hunting, being outdoors, and spent several years coaching his son’s little league baseball team. Robert was known to his family as the “jack-knife” because he had the eye to see a problem and the ability to fix it. Most importantly, Robert was fiercely loyal to his family and will leave a hole in the hearts of those he loved most, his wife of 11 years, Megan; their children, Leah Kay Bennett and Robert Michael “Robby” Bennett; parents, David and Becky Bennett; siblings, nieces, and nephews, Heather (John) Wilke and children, Morgan Elizabeth and Gabe Bennett; Sarah (Curt) Weiden and sons, Noah Todd and Charlie Ray; Meredith (Kyle) Kriger and children, Maddyson Genevieve, Lincoln Robert, and Asher David; Jesse (Tori) Scott; and Jeremy Gerrans; parents-in-law, Michael and Nancy Scott; grandparents, Wesley and Molly Hutchins and Carol Vanderberg; and many loving aunts, uncles, cousins, and friends. A MEMORIAL SERVICE will be held 3:00 PM Tuesday, December 21, 2021 at The Lee Chapel of Sytsema Funeral & Cremation Services, 6291 Harvey St., Norton Shores, MI 49444. VISITATION will be one hour prior to his service. In lieu of flowers, please consider donations to his children’s education fund C/O Megan Bennett, or plant a tree in his memory. You may sign his online guestbook at www.sytsemafh.com

Mr. Robert Lee Bennett, age 34, died unexpectedly Wednesday, December 15, 2021 as the result of an ATV accident. Robert was born in Muskegon on April 8, 1987 to David and Becky (Read) Bennett and was a graduate of Reeths-Puffer High School,... View Obituary & Service Information

The family of Robert Lee Bennett created this Life Tributes page to make it easy to share your memories.

Send flowers to the Bennett family.