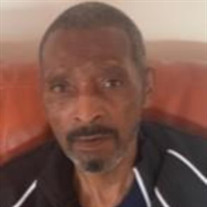 Robert L. Burks-Randle Sr., age 77, met his Lord and Savior on Tuesday, August 31, 2021 at home. He was born on November 12, 1943 and raised by S.J. and Lorraine (Randle) Burks in Little Rock, AR. Early in life, his family made their way to Muskegon, MI and has lived there ever since. He was a dedicated employee of CWC Textron, where he worked as a machine operator for numerous years. Robert enjoyed many things in life but had a passion for watching western movies. Usually from dawn until dusk, he would have the television set on his western channel. He was a proud father, loving grandfather and wonderful great-grandfather. Robert was a kindhearted and generous man, who was always willing to help others. He had a laid-back demeanor most days but was willing to tell it like it is. Robert’s sweet and loving spirit will truly be missed by many. He is survived by his 8 children, Robert (Rhonda) Randle Jr., Edduana (Thomas) Means- Harris, Arcacia (Ike) Randle-Ollison, Robrietta Randle, Aureellius (Latonia) Randle, Tammie Burks-Evans, Deborah Evans and Shantiara Randle; 27 grandchildren; numerous great-grandchildren and several great-great-grandchildren; sister, Lindareane Burks-Richmond; brother, James E. Burks; mother of 6 of his children, Eddie M. Randle-Means; special niece, Marinda Burks; longtime friend, Brenda Fuquay; host of nieces and nephews; sister-in-law, Aleta Burks; and dear friends. He is preceded in death by his parents; daughter, Roben Randle; 2 sisters, Estereane Jordan and Shirley Burks; 2 brothers, C.J. Burks and J.W. Burks; brother-in-law, Larry Richmond; and son-in-law, Jeffery Means. A Celebrational Gathering will be held from 12:00-1:00 PM on Thursday, September 9, 2021 at The Sytsema Chapel of Sytsema Funeral & Cremation Services, 737 E. Apple Ave., Muskegon, MI 49442 with Pastor Anthony C. Williams officiating. Robert will be laid to rest at Mona View Cemetery. A Repass to follow at 2224 Maffett St., Muskegon Heights, MI 49444 friends and family are welcome. The family would like to extend a special thanks to the doctors and nurses at Life Circles for the amazing care they provided for Robert. Share memories with the family at www.sytsemafh.com.

The family of Robert L. Burks-Randle Sr. created this Life Tributes page to make it easy to share your memories.

Send flowers to the Burks-Randle family.