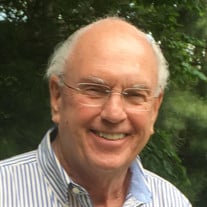 Robert “Bob” Lynn Clark, age 83, of Grand Haven, Michigan passed away surrounded by his loving family on October 14, 2021. Born May 29, 1938 in Grand Haven, Michigan, he was the son of the late Robert F. Clark and Cloyce J. (Guiles) Clark. Bob missed his parents incredibly and now it's our turn. He was a positive, upbeat person who valued a smile, optimism, family and friends even in the face of great loss he could manage a smile. He loved getting together, sharing a meal and telling jokes. The holidays were amazing because he cherished his family being together. Bob was a third generation resident of Grand Haven and it was the center of his universe. He loved being on the water; boating, fishing for perch, water skiing in the Grand River, scuba diving shipwrecks and ultimately, serving in the U.S. Navy. He was a veteran who proudly served his country after graduating from Grand Haven High School in 1956. Robert was the first generation in his family to graduate from college. He went on to earn a master’s degree in educational administration and became a high school principal. Summers, he ran a small vacation rental business. Winters, Bob loved skiing. He learned how to ski while visiting Switzerland in the 1960s, returned to Michigan and joined the National Ski Patrol. Robert is survived by his daughter and son-in-law, Susan and Ilan Pragaspathy of Chicago, Illinois; and two grandchildren, Lucas and Ilanko Pragaspathy. Per the family’s wishes, a private graveside service and burial will take place at Lake Forest Cemetery. Arrangements by The VanZantwick Chapel of Sytsema Funeral & Cremation Services, 620 Washington Ave., Grand Haven, MI 49417.

The family of Robert L. Clark created this Life Tributes page to make it easy to share your memories.

Send flowers to the Clark family.